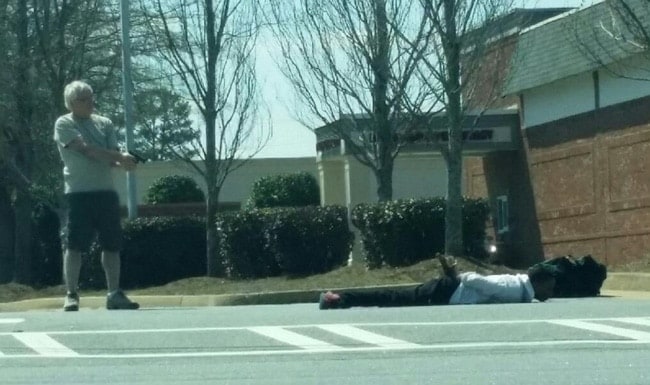 The man who took this photo said he was going to offer the man assistance, but quickly realized he had the situation under control on his own. (Photo: My Fox Atlanta)

A man who attempted to rob a Wells Fargo bank in Cobb County, Georgia, Tuesday afternoon may have thought he was going to make a clean getaway when he walked out of the bank with a bag full of cash, but the situation quickly turned when he was met by an armed customer in the parking lot who wasn’t about to let him go.

The suspect, who was later identified as 25-year-old Mark Katchem, entered the bank just before 3 p.m. and handed the teller a note demanding money, a Fox news affiliate reported. Katchem was given the cash, but while he was collecting, a customer, who has not been publicly identified, noticed what was happening, kept his cool and followed Katchem out of the bank.

Once outside, the customer, who also happened to be a former member of the military, ran to his car, grabbed a gun and proceeded to tackle Katchem. The customer then tied Katchem’s hands behind his back, with what appeared to be a piece of clothing. The customer continued to keep his gun trained on Katchem, who was lying face down on the ground, until police arrived a short time later.

Nick Daley was driving by the bank when he witnessed the armed citizen in action. Daley said his initial instinct was to help the man out with the suspect, but almost instantly realized that his assistance wasn’t necessary.

“I immediately knew by the way the man was standing, his stance, he was in control of the situation,” Daley said.

So Daley snapped a photo of the incident instead.

Katchem, who did not appear to be armed, was arrested and charged with robbery by intimidation and is being held on a $15,000 bond.

Wells Fargo, who has a no-guns policy, was in the news last February when the manager of a Oldsmar, Florida, bank branch said she was fired for bringing her 9mm pistol to work with her.

“I’m a manager of a bank,” Ivette Ros said after filing a lawsuit against Wells Fargo. “We have a lot of robberies that happen in our banks. I feel safer having that weapon if I ever needed to protect my employees.”

But in this case, it appears an armed customer was the one providing protection.