Dem governors in Montana, Virginia, give thumbs down to gun reform bills 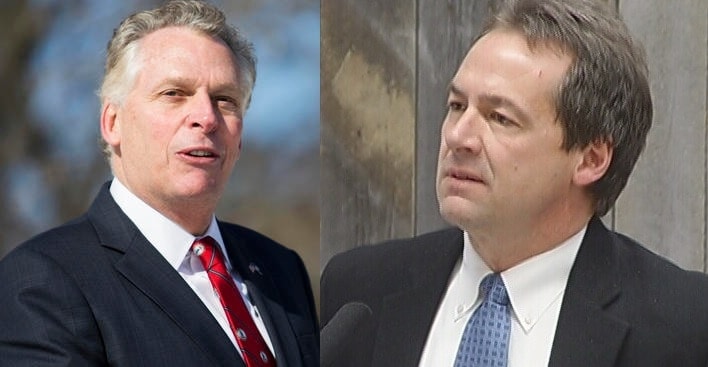 Among the three proposals rejected by McAuliffe included expansions of concealed carry protections and shall-certify legislation to speed up the processing of National Firearms Act items such as suppressors. Bullock in turn scuttled a move towards permitless or constitutional carry and a measure to nullify federal gun control laws.

In discussion of his vetoes Friday, McAuliffe cited safety concerns for his reasoning not to pass a measure to allow concealed carry permit holders to have loaded long arms in their vehicles, saying, “One of the first things you learn in gun safety is you do not keep a loaded gun in your vehicle,” as reported by the Richmond Times-Dispatch.

Likewise for his veto of legislation that would have prevented the state’s database of permit holders from being shared with jurisdictions that did not have reciprocity agreements with Virginia, McAuliffe stated that his pen was swayed over concern for the safety of law enforcement officers.

“Governor McAuliffe has indicated time and time again that he doesn’t answer to the gun lobby,” Lori Haas of the Coalition to Stop Gun Violence, said in a statement. “His vetoes this week convey that he knows that his job is to protect the people of Virginia from gun violence that is entirely preventable. We thank him for his decisive action to safeguard our families.”

In Big Sky Country, Democratic Gov. Steve Bullock scrapped a measure that would have expanded the state’s already existing permitless concealed carry laws to metropolitan areas of the state. Like McAuliffe, he cited safety concerns.

“While I will fiercely defend the 2nd Amendment rights of our citizens, I cannot support an absurd concept that threatens the safety of our communities by not providing for the basic fundamentals of gun safety or mental-health screening,” Bullock noted in his veto message, as reported by the Billings Gazette.

The proposal, House Bill 298, was a simple two-page act designed to allow the carry of concealed firearms in the state without a permit, providing the residents can legally possess a firearm. Currently, the state enjoys a rural form of constitutional carry, with permits only required inside city limits.

Besides the constitutional carry measure, Bullock for the second time in three years dropped veto ink on legislation that would have prohibited local authorities from assisting in the enforcement of federal gun laws.

The measure, House Bill 203, would have made it illegal in Montana to enforce any federal law that the state deems to be in violation of the Second Amendment to include limits on firearms, ammunition and accessories. Montana’s previous attempt at curtailing Washington’s gun laws in the state, the Firearms Freedom Act, met with dismissal by a federal court of appeals in 2013.

Sponsors of the nullification legislation were not impressed with Bullock’s actions.

“I think Montanans are at greater risk of federal overreach on their gun rights,” Rep. Art Wittich, R-Bozeman, HB 203 sponsor, said. “It seems like every day you hear about another effort by Congress and President Obama to restrict gun rights and ammunition. This would have been a common-sense approach to protect Montanans.”