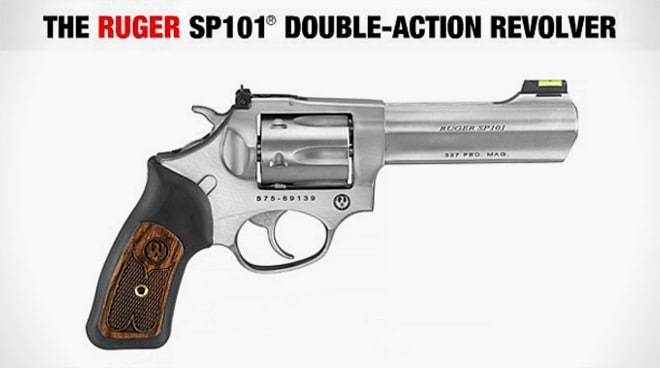 Sturm, Ruger & Co. is bringing back a model of revolver that was deeply missed by a small but dedicated group of shooters, the SP101 .327 Federal Magnum. But that’s not all as the new double-action SP101 .327 Mag has been improved and updated with features that fit the hard-hitting micro-mag.

A relatively new magnum cartridge, .327 Magnum, has a cult-like following and for good reasons. The high-pressure round can speed smaller bullets in excess of 1,500 feet-per-second, going toe-to-toe with .357 Magnum in the energy department with significantly less recoil. Even with the lighter projectiles .327 Magnum can be loaded well in excess of 700 foot-pounds of energy, making it a true magnum round.

And the new Ruger SP101 is going to make a lot of .327 Magnum fans happy. Unlike the old model the new SP101 has a longer 4.2-inch barrel, based on the .357 Magnum kit gun. Likewise the new SP101 .327 Magnum has an adjustable rear sight and a bright green fiber-optic front sight.

With the added inch of barrel the new SP101 .327 Magnum will perform in-line with full-size .327 Magnum revolvers and not trade off high muzzle velocities in exchange for a compact package. The SP101 frame is much smaller and lighter than the full-size Ruger GP100.

The smaller-diameter cartridge means that the SP101 is big enough for six shots, one more than in .357 Magnum in a package that weighs considerably less than a GP100, too. With the longer barrel the SP101 .327 Mag still only weighs 29 ounces, making it a very flexible handgun.

In this configuration the SP101 .327 Mag can easily be considered a kit gun, a concept Ruger’s been bringing back in spades. Kit guns are light revolvers to toss in your day bag, hydration pack, or if you’re a traditionalist, your tackle box.

At less than 30 ounces it could be carried concealed pretty easily and with six rounds gives you one more shot than the average snubbie, although with its target sights and spurred hammer it may snag on the draw without an adequate holster. Since the new .327 is following in the footsteps of the established 4-inch SP101, which is also offered in .22 Long Rifle, it shouldn’t be too hard to find accessories for this updated model.

Like many of Ruger’s steel-framed revolvers the SP101 .327 Magmun has a brushed stainless finish and soft rubber grips with hardwood inserts. Apart from the barrel it’s a regular SP101 and aftermarket grips and spare parts are plentiful.

With the return of the SP101 in .327 Magnum, Ruger is showing a renewed interest in this powerful yet niche cartridge. Ruger recently launched the Single Seven, a seven-shot single-action .327 Magnum revolver. The Single-Seven offers more barrel length options while the SP101 is a bit more flexible, especially if needed for self-defense.

The MSRP is the same as the other 4-inch SP101 revolvers and is expected to have a street price at around $600 and possibly less.