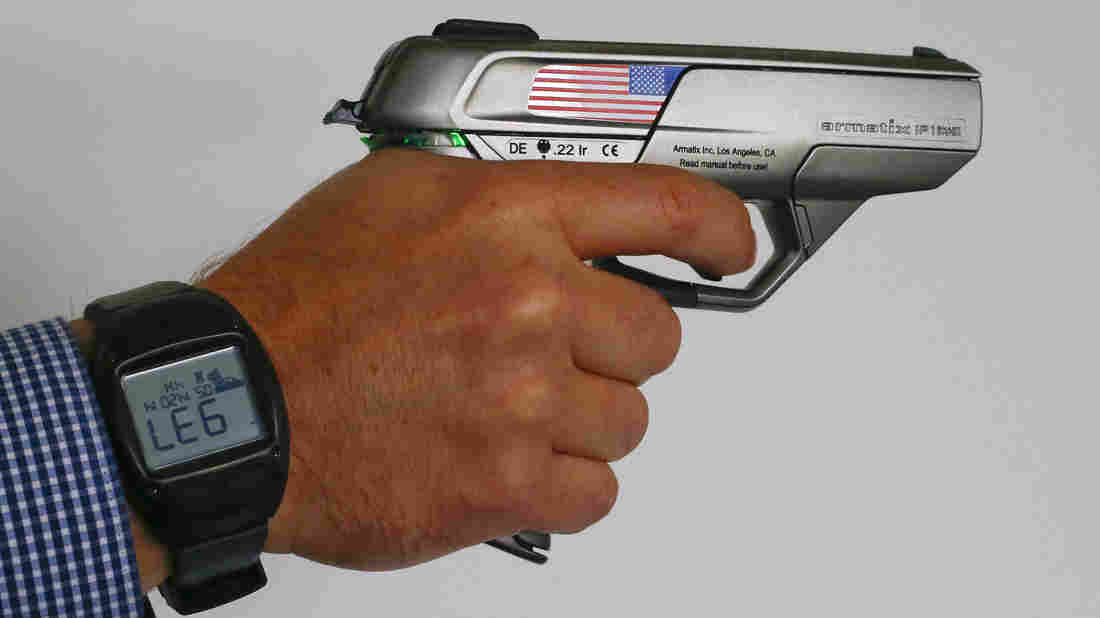 The German-made Armatix iP1 smart gun, which uses an RFID technology watch to unlock it, was marketed last year in California without success. (Photo: NPR)

A year after a so-called smart gun marketed first in California sparked controversy, a state lawmaker has introduced a measure that would create a new crime to give someone a user-authorized firearm that doesn’t meet a list of requirements.

The proposal, filed in the state Senate last month, outlines a list of specifications that a smart gun sold in the state would have to meet before it could be transferred. Selling one that does not meet the requirements would be a misdemeanor.

“The bill would define a user-authorized firearm as a firearm that will only fire when activated by an authorized user,” reads the introduction filed by Sen. Jerry Hill, a Democrat that represents the San Mateo/Silicon Valley area.

Hill’s measure, SB 678, would mandate a 10-requirement list of specifications to the state’s gun laws that would apply to smart guns. Among these would be that the firearm be approved by a laboratory certified by the U.S. Army Armament Research, Development and Engineering Center.

Last March, the Oak Tree Gun Club in Santa Clarita was briefly associated with the German-made Armatix iP1 smart gun – before rapidly backpedaling away from the fledgling technology following a public outcry. The iP1 incorporates biometrics, which will only fire if the matched RFID technology companion wristwatch is within range of the gun itself. Without the watch, the gun will not shoot.

Proponents of the technology call it a safety measure that can help disable stolen or lost guns, cutting down on unauthorized use and potential deaths.

Critics of smart guns argue that the technology is immature, pointing to polls which have found that roughly three-quarters of the public have said they would not buy a smart gun, would not trust the reliability of one and that the government should not mandate such technology.

In the Golden State at least, gun rights advocates to include the California Rifle and Pistol Association and the Firearms Policy Coalition are watching the measure that some worry could lead to a mandate for future sales to be limited to smart guns only.

Combs, among others, see a mandate for the new technology as the wrong solution to firearms safety.

“More than 500,000 handguns were sold in 2014 in California alone. These handguns are safe, reliable, and time-tested designs – and none of them are smart guns. Unsurprisingly, violent crime in California continues to fall as handgun ownership and carry outside the home has steadily increased,” Combs said.

The Second Amendment advocate feels that gun owners and manufacturers know what works and what does not, and that the Armatix experience from last year shows there is little desire or demand for user-authorized firearms.

“Frankly, people don’t want or need so-called ‘smart guns,'” Combs said. “Smart guns are not just a bad idea; they are an incredibly dangerous one. One wonders if Senator Hill has ever heard of a hacker before.”

Senate Bill 678 is set for a hearing with the Public Safety Committee on April 14.