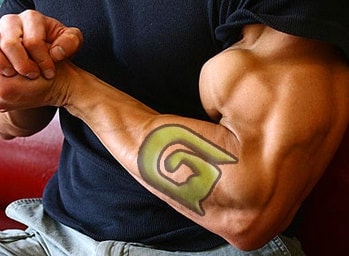 Starting tomorrow, April 2, 2015, Guns.com will be changing formats. All new content will focus on fitness, specifically biceps (a.k.a. guns).

Citing a desire to take the site in a “new direction,” Guns.com publisher Christopher E. Callahan announced today that, effective tomorrow, Guns.com will no longer be an independent web publication dedicated to covering anything and everything related to firearms and ammunition. Instead, Guns.com will focus exclusively on providing visitors with men’s and sometimes women’s fitness content, specifically pics and analysis of America’s best bulging biceps.

Via a Skype call from one of several mall picture kiosks he owns, Callahan stated the reason for this sudden shake-up to the Guns.com staff:

“After five years, it has become clear to me that firearms are a topic that Americans just aren’t that passionate about any more.  People don’t seem to really care about the 2nd Amendment like I thought they would so we’re changing the site to something I know everyone loves: pics of rippling, 100-pound-curling biceps muscles. Guns, pythons, pipes, whatever you want to call them. Plus, we already own the name Guns.com so that helps.”

For those who know and work with the unconventional media mogul, the format switch comes suddenly but not as a shock.  Callahan, who’s iconic mesh tank top has been a fixture in the Guns.com offices since the publications inception in 2010, has never been shy about his favorite hobby–flexing– often playfully asking interns if they “have their tickets to the gun show?”  The latter activity once provoked a family-organized intervention.

Callahan explained further that he timed this shift in content to coincide with the warmer weather, when, in his words, “the guns are known to come out of hibernation.”

“Spring is upon us and it’s time to bust out the Navy and the Air Force,” said Callahan, adding that the new site will also host sections where users can submit pics of their “lats” and “delts.”

Chris believes that he has identified an unmet demand with huge promise.  Between Facebook, Twitter, Instagram, Myspace, Google+, Flickr, Pinterest, plus an infinite number of dating sites, Callahan cited that there just aren’t enough avenues online for people to submit photos of themselves flexing, half nude.

He hopes the new Guns.com will be a place where Americans can get over their shame and finally be able put their bodies on display.

The new site will host up-to-the-minute reporting on who even lifts, deals on synthol and several interactive features, including “Pimp My Guns,” which allows users to superimpose barbed-wire tats onto pictures of their favorite guns, if for some reason they don’t already have them.

“I guess I have always been what you would call a guns aficionado. Heck, I just knocked out three sets of curls while making this announcement. Bet you guys didn’t know that.  Forty-fives– no big deal,” he said in closing. “I’m just excited to kick off a venture with so much promise and demand. Guns, baby, guns! Now if you’ll excuse me, I’m off to go pound a protein shake.  Somebody type that all up, please.”

Starting tomorrow, Guns.com will no longer be the source for the latest in firearms news, reviews, opinions and original content.  To all the readers who have enjoyed our past programming and come to rely on our commitment to fair and accurate journalism, thank you for supporting us and we hope you stick around as we move into this new, muscle-bound, phase.  We’re looking forward to making Guns.com the place for all you guns aficionados.