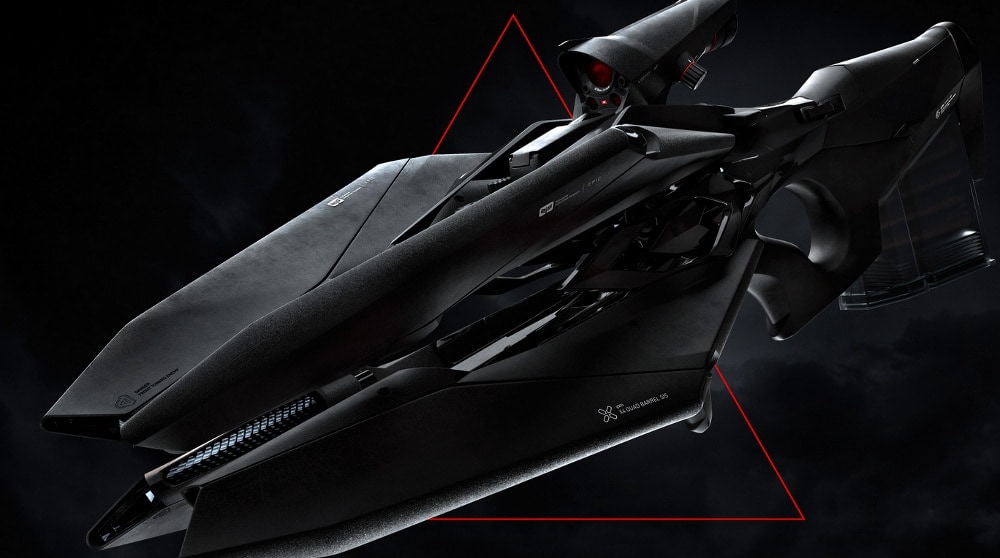 iPeg, a new aerospace firm with an interest in guided rifles, is now taking pre-orders for the Epic A3, the first commercially-produced man-portable rail gun. A hybrid design, the Epic gun uses conventional .50 BMG cartridges with modified bullets that can be magnetically guided on target.

This unique bullpup has four barrels that allow it to “aim” at a wider range of targets that are not directly in front of the gun. Current guided rifles must either be re-positioned to acquire their targets after they’re tagged or use electronic projectiles that can shift their trajectory in flight.

The multiple barrels aren’t used as a volley fire mechanism, rather, they simple provide a wider cone of target tracking. The Epic A3 is capable of tracking multiple target simultaneously, however the recoil associated with multiple rapid shots prohibits any type of automatic fire.

Each barrel is surrounded by a series of electromagnets that alter the trajectory of each fired round to match the flight path determined by the tracking computer. iPeg calls this the Solenoid Induction System, or SIS.

While the Epic A3 has obvious military and law enforcement applications, iPeg’s primary audience is the commercial market. The Epic gun has appeal to hunters looking for a solid, ethical cull even at long ranges.

The Epic A3 uses conventional batteries to power the target tracking electronics but in an effort to keep the size and weight down uses a series of piezoelectric vanes and blowback regenerative brakes to capture energy from each fired round to power the solenoid system that guides the rounds to their target. 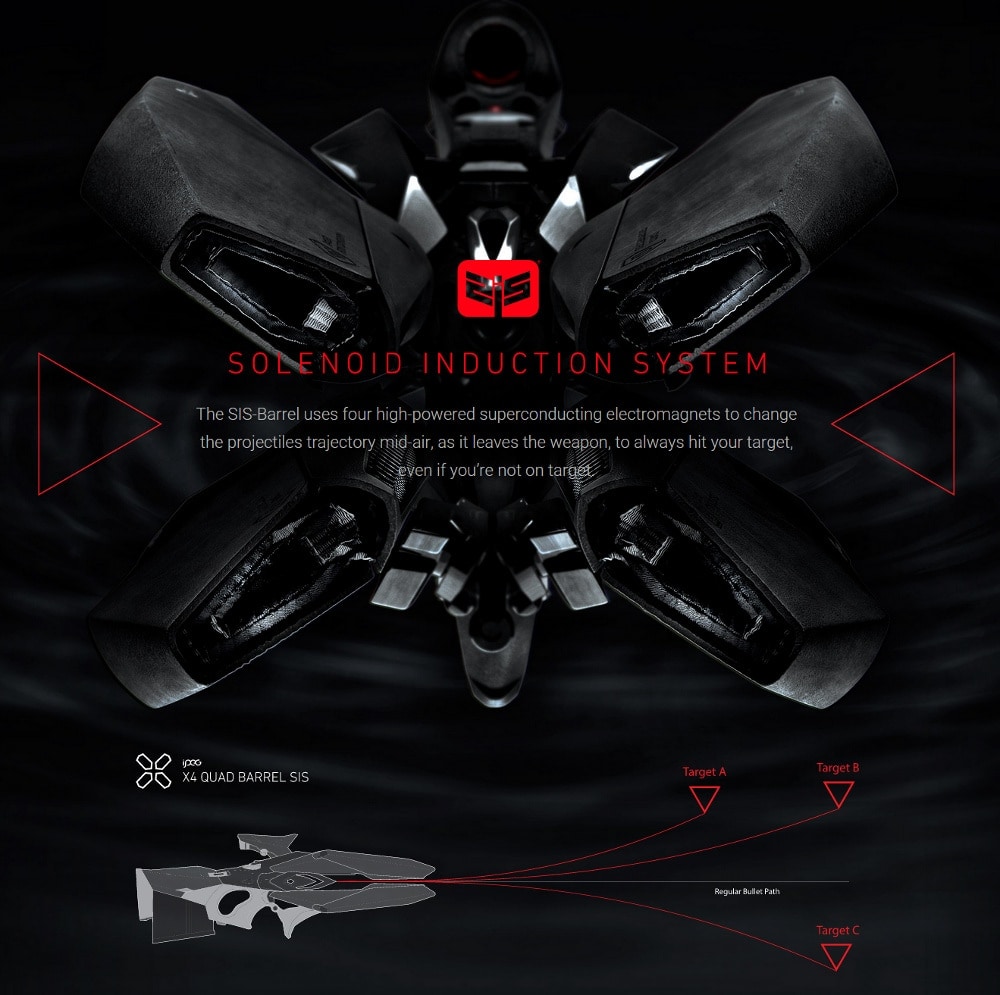 A look at the muzzle of this ground-breaking guided rifle. (Photo: iPeg)

This energy capture combination is the A3’s alternative to bulky power systems and helps keep the weight down as much as possible. iPeg dubbed it the Thermal Energy Conversion system, or TEC Shield.

Another improvement this rifle has over previous-generation guided munitions is that it uses a conventional magnified optic with a projected reticle. Existing precision guided rifles have small LCD displays connected to cameras with a digitally-superimposed reticle on-screen.

The projection system promises better clarity in the field, and uses a fiber-optic filament to boost the reticle’s visibility even in bright, direct daylight.

This latest gun represents a new step in the field of guided rifles and in the long run, will change the way we think about shooting.

While conventional shooting skills will never be forgotten, when shots matter people are going to want the benefit of guided projectiles.

Still, the Epic A3 has its limitations. The multi-barrel design is heavy, tipping the scales at just over 17 pounds, unloaded. The barrels are also short, at a legal minimum length of 16.1 inches each.

Also the thermoelectric-effect generation system taps some of the cartridge’s energy to power the SIS guidance mechanism. Taken together, this means that the projectiles don’t have the muzzle velocity of conventional .50 BMG rifles. 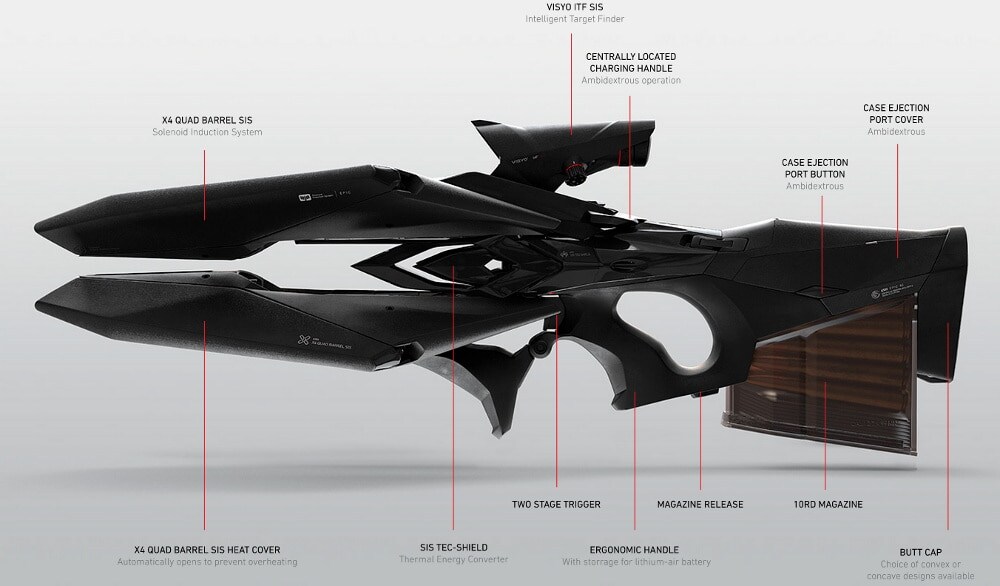 The Epic A3 features include some pretty standard functions, too, including a target 2-stage trigger. (Photo: iPeg)

The bullets used by the Epic bullpup are also not entirely constructed of lead, which lowers their density and range, too. iPeg lists the effective range of the Epic A3 at 1,200 yards, which is the maximum distance the optics can track targets at.

But that’s more than enough for this next-generation guided rifle, whether it’s for big game hunting or anything else, realistically. iPeg is taking pre-orders for these guns, but at $89,000 the Epic A3 will likely be a dream gun for the average shooter. Delivery is expected to be around Q4 of 2015 but with these sort of products, you can never be sure. We wouldn’t be surprised to see these to take a little extra time to ship.

iPeg is working on a few conventional .50 BMG rifles using the same bullpup lower in the meantime that will be available at lower price points. For more information about these and to place your pre-order for the Epic A3 check out the iPeg website.