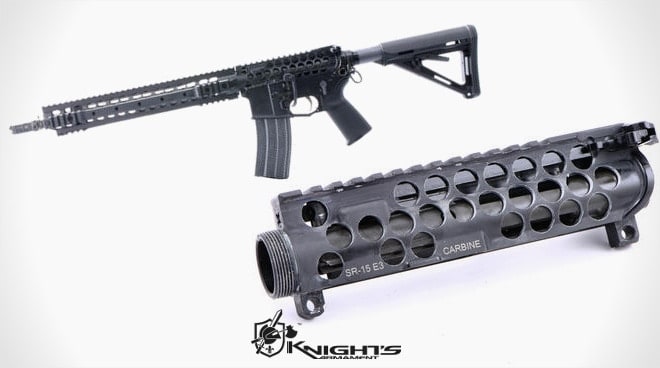 Knight’s Armament Company, KAC, has partnered with BoltCarrier to produce dealer-exclusive new featherweight receivers. Right now only upper receivers are in production but lowers are expected to follow soon.

Skeletonized receivers are a final frontier in lightweight AR design. Optimized for KAC’s battle-proven SR-15 uppers, the process can be applied to most standard AR-15 uppers, whether their milled, cast or forged.

The skeletonized uppers are precision-machined to match the dimpling pattern on lightened KAC barrels. BoltCarrier offers the upgrade for a small service fee of $150 in addition to the price of the upper.

This is a great way for people to lighten their AR-15 rifles. “No one has been brave enough to skeletonize the upper receiver itself — until now,” said BoltCarrier in a statement.

“We’ve developed a technique for removing material in a way that maintains the structural integrity without compromising rigidity. Furthermore, our technique reduces the weight of the receiver by nearly a quarter while improving airflow and cooling.”

The resulting upper weighs just a hair over 5 ounces stripped, which may not seem like much, but anyone who’s had to sling a rifle for long knows that ounces are pounds. Every bit helps, and the skeletonizing has other benefits, too.

These uppers make maintenance a snap, providing access to parts of the bolt carrier group including the cam pin for quick parts swaps in the field. No need to shotgun these uppers at all.

The reduced-friction design means less lube and while some argue that it makes it easy for debris to get into the action of the rifle, it also makes it even easier for dirt and carbon fouling to get out of the rifle.

In the case of malfunctions the skeletonized upper also allows shooters to look into their rifle to identify the nature of the stoppage without having to break their cheek weld and tilt the gun over. When seconds matter, this is a huge advantage of the BoltCarrier skeletonized receiver.

The team is working on a new line-up of skeletonized, low-mass components. (Photo: BoltCarrier)

BoltCarrier is working closely with KAC engineers to develop other ways to lighten ARs including low-mass buffer tubes, skeletonized buffers, and even skeletonized fire control groups and hollow takedown pins.

They’re also turning to other materials to cut weight, including new titanium-aluminum alloys. If you’re building an ultralight AR-15 and don’t want to turn to polymers be sure to check out these new receivers by BoltCarrier today.