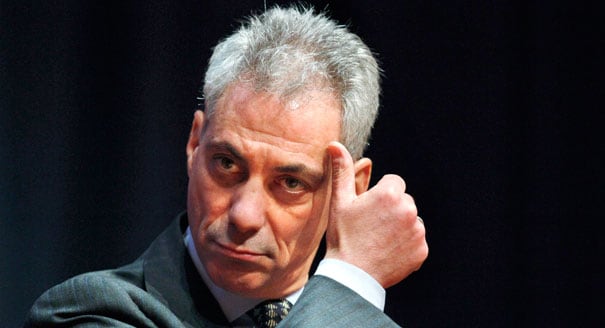 Chicago Mayor Rahm Emanuel, defending the 355 reported shootings in the first quarter of 2015 compared with 253 for last year, says the city has model gun laws that the state and federal government need to catch up to. (Photo: AP)

Speaking of what he terms the city’s, “model gun control legislation,” Chicago Mayor Rahm Emanuel is scrambling to defend a rising murder rate less than a week away from a crucial election.

The move comes just a day after the Chicago Police Department released its first quarter crime data that, although notes a slight overall decrease in crime rates, also highlight the fact that the number of shootings has risen some 40 percent over the same period last year.

Overall, Chicago authorities recorded 18 more homicides and 102 more shootings in the first three months of 2015 when compared to the first quarter of last year. Averaged out over the period, there was a shooting in the city roughly every five hours.

The Mayor, speaking Wednesday, said he was proud of the overall decrease in crime and cited that illegal gun seizures in city are also up. However when the number shootings comes into play, Emanuel explained that while the city has very strict gun control policies, the rest of the state needs to follow its lead to prevent illegal firearms from finding their way to Chicago’s streets.

“That means, while we have model gun control legislation here — at gun stores, it’s now filmed.  There are further background checks,” Emanuel said to the Sun Times. “[But] to get the gains we need, you need to change the gun laws. Which means Springfield has to step up.”

The news of the Windy City’s apparent murder jump could not come at a worse time for the Mayor.

Facing a Democratic Party runoff on April 7, populist challenger Jesus “Chuy” Garcia is a threat to Emanuel in recent opinion polls. Garcia was quick to weigh in on the crime numbers, allowing that the Chicago Police are somewhat at fault but in the end placing much of the blame at the foot of the current Mayor.

“Public safety is not a major concern of Rahm Emanuel and his administration,” Garcia said. “The leadership of the Chicago Police Department leaves a lot to be desired. However, you must remember that the ultimate decision maker, the ultimate decider of which policies are instituted as it relates to public safety deployment of services and resources is the mayor of the city of Chicago.”

Police in the city, likewise, are under the microscope for their tactics to stamp out crime. Chicago police are now among the nation’s leaders in the use of the controversial “stop-and-frisk” practice, employing the tactic on average nearly four times as often as New York City police as highlighted by a report released last week by the American Civil Liberties Union of Illinois.

In New York the practice was curbed by a federal judge in 2013, who found that it violated the constitutional rights of minorities, delivering a blow to the anti-crime policies of then-Mayor Michael Bloomberg.

The ACLU report highlighted that last summer alone, Chicago police made over a quarter million stops — absent of judicial review — that did not lead to an arrest.

“Chicago has been systematically abusing this practice, for reasons that are not justified by our constitution,” said Harvey Grossman, legal director for the state ACLU.

The police department, weighing in on crime numbers, promised more interaction between law enforcement and residents, but added weight to Emanuel’s call for even more gun laws.

“We will continue building on our community policing philosophy, putting more officers in high crime areas, intervening in gang conflicts, and fostering stronger relationships with the communities we serve,” Chicago Police Supt. Garry McCarthy said. “Yet even with the strongest partnerships and best policing in the world without better state and federal laws to help keep illegal guns off the streets we will continue to face an uphill battle.”

The latest polls in the race for mayor show Emanuel with 58 percent of respondents in his camp compared with 30 percent for Garcia with the balance largely undecided.