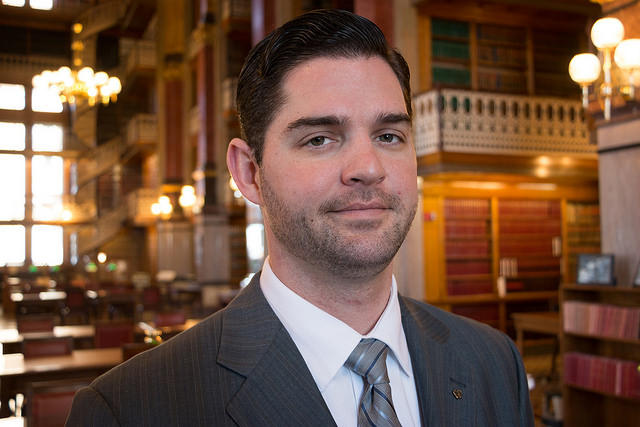 Rep. Matt Windschitl, R-Missouri Valley, is pushing to restore reforms to a gun bill that the Iowa Senate omitted, and the clock is ticking. (Photo: John Pemble/Iowa Public Radio)

Following a bait and switch in the state Senate on an omnibus gun reform proposal earlier in the week, lawmakers in the lower chamber of the Iowa legislature are fighting the clock to beef up what they have.

The bill sent over from the Senate, rather than containing a host of measures that would have had sweeping effect on the state’s gun laws, only addresses suppressors. Now, facing an end of the week deadline to pass the legislation, the House Judiciary Committee voted 19-2 Wednesday to amend the proposal to include most of what they wanted in the first place.

“We’re going to give it another shot,” said Rep. Matt Windschitl, R-Missouri Valley, sponsor of the original House bill and is now leading efforts to recast the one sent from the Senate. “In doing that, we’re going to once again try and find middle ground. This bill has been a collaboration from the beginning between law enforcement, (the) Second Amendment community, Iowans, legislators and many different parties.”

Added to the bill, SF 427, are measures that would safeguard the state’s concealed carry permit holder data from most public disclosure, allow youth under 14 to use handguns for target shooting and hunting reasons, strengthen straw purchase laws, allow mandatory gun training to be accomplished online and extend the ability of licensed security guards to carry on public school property.

The only notable changes from the original bill approved by the House, as reported by the Des Moines Register, would be to retain the current three-day delay between issuance of a handgun permit and it becoming effective.

State gun rights advocates praised the fast action of the House and are preparing to lobby the Senate to make good on the apparent second chance at passing the sweeping reforms.

“The Senate says they want to pass a gun bill,” said Kurt Liske of the Iowa Firearms Coalition in a statement Wednesday. “We’ve now done our part (again) to give them the opportunity. Now it’s their turn to live up to their word.”

The bill now heads to the House floor for a final vote that would send it back to the Senate for concurrence with the amended version.