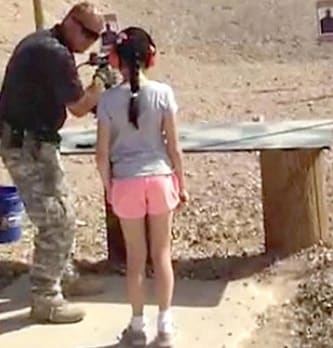 In 2014 firearms instructor Charles Vacca was killed in a tragic accident involving a 9 year old and an Uzi. (Mohave County sheriff’s office)

Citing a high-profile range accident last year that occurred 1,300 miles away, a Louisiana Democrat wants to ban youth under 13 years of age in her state from being able to shoot an Uzi submachine gun.

The lawmaker has introduced a bill to the state House that would make it a felony to provide an Uzi and would send those in violation to the penitentiary for up to two years.

“I think it’s so important that we, as legislators, continue to make sure that we can do everything that we can to protect the safety of our children,” said Rep. Barbara Norton, D-Shreveport, sponsor of the legislation. “When I think about the fact of a 12-year-old having access to a machine gun, it concerns me.”

Norton advised the Times-Picayune that she was moved to introduce her measure following the tragic death last summer of firearms instructor Charles Vacca, 39, who was accidentally shot in the head by a 9-year-old girl he was teaching to shoot an Uzi.

Her legislation, HB 86, is very narrowly focused, and specifically mentions only the Uzi submachine gun as being included in its scope. Its language, if adopted into law as written, would forbid anyone from giving, selling, donating, lending, or otherwise providing one of the firearms to a youth 12 years of age or lower, even temporarily at a range. The act does not make allowances for select-fire weapons used in semi-auto mode, or those that have been modified to fire semi-auto only.

Anyone found to allow a pre-teen to fire an Uzi in the Sportsman’s Paradise could face fines of up to $5,000 and imprisonment at hard labor for as many as two years.

According to data maintained under the National Firearms Act, Louisiana as of March 2014 has 6,583 registered full-auto select fire weapons on file. It is unknown how many of these, if any, are Title II Uzis.

Norton’s measure is not the first time legislators have proposed a ban on children from shooting select-fire weapons. Last August, an Arizona Democrat introduced an unsuccessful measure that would have prohibited the use of Title II automatic weapons by shooters under 16 years of age even if used on a shooting range.

Louisiana HB 86 has been referred to the House Committee on Administration of Criminal Justice.