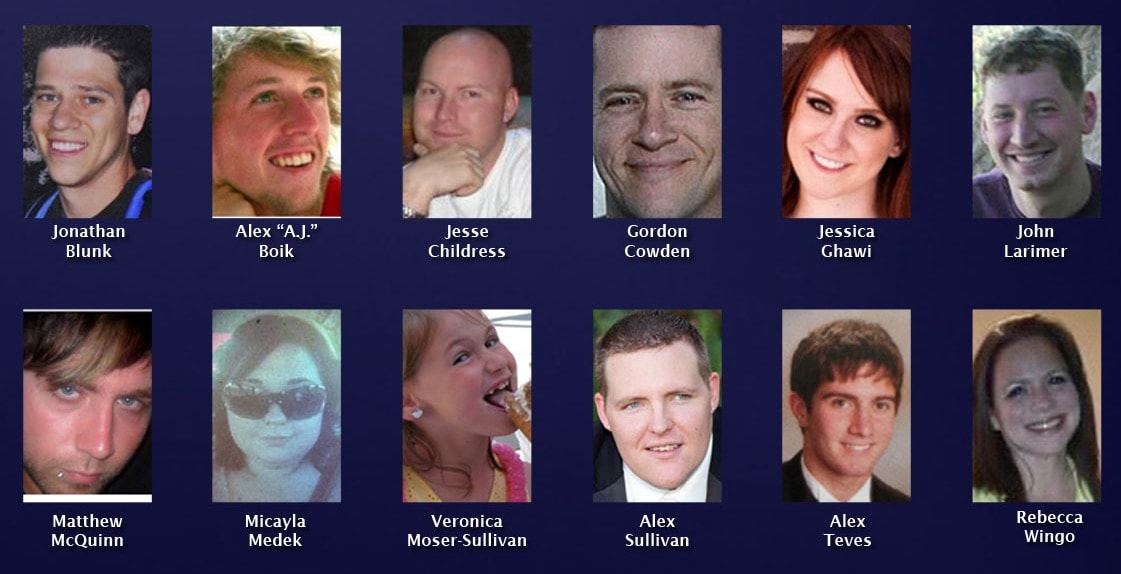 The 12 killed during the shooting at the Aurora movie theater in July 2012.

A federal judge dismissed claims that Lucky Gunner and Sportman’s Guide were negligent when they sold ammunition and gear to the gunman who in killed 12 people and injured 70 others at a movie theater in Aurora, Colorado.

After roughly six months in a Colorado federal court, Senior District Judge Richard Matsch issued the order last week to dismiss claims that the online retailers failed to thoroughly screen James Holmes before he bought the items he later used to massacre an audience watching a showing of The Dark Knight Rises in July 2012.

Matsch, who was nominated in 1974 by President Richard Nixon, cited the Protection of Lawful Commerce in Arms Act in the ruling, a law passed in 2005 to shield gun makers and retailers from liability for injuries caused by a third party with their products.

“Holmes meticulously prepared for his crime, arriving at the theater equipped with multiple firearms, ammunition, and other gear allegedly purchased from several distinct business entities operating both online and through brick and mortar locations,” Matsch’s opinion reads. “Neither the web nor the face-to-face sales of ammunition and other products to Holmes can plausibly constitute a substantial factor causing the deaths and injuries in this theater shooting.”

Family members of one of the victims killed during the horrific event, represented by the Brady Campaign to Prevent Gun Violence, filed suit in September. Sandy and Lonnie Phillips alleged the sellers failed to implement safeguards that would prevent dangerous people like Holmes from obtaining the equipment used to kill their daughter, Jessica Ghawi.

Matsch, who presided over the trial of Oklahoma City bombing defendants Timothy McVeigh and Terry Nichols, ordered the Phillips to pay court costs.