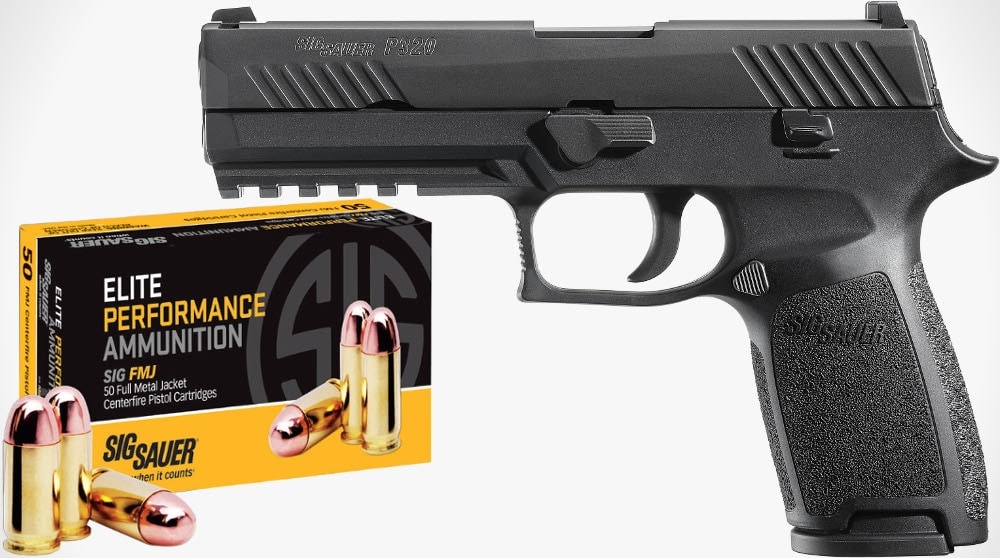 A Sig pistol on display with new Elite Performance Ammo.

Sig Sauer is expanding its ammo manufacturing to include a parallel line of ball rounds for fun and practice designed to match the performance of expanding hollow point ammunition. The company is also starting to snatch up police contracts for their new striker-fired P320 pistol.

Both are new product lines Sig launched last year and both are quickly seeing a lot of success. Designed for duty and self-defense, Elite Performance Ammunition is offered in a variety of mainstream centerfire calibers, just like the P320.

Sig is kicking off their ball ammo selection with 100-grain .380 ACP, 115-grain 9mm Luger, 124-grain .357 SIG, 180-grain .40 S&W, 180-grain 10mm and 230-grain .45 ACP. These are loaded to the same levels as their hollow point rounds to ensure that users training with the lower cost ammo have the same shooting experience when using their self-defense ammo.

“With the Sig FMJ ammunition, we now have extremely accurate and reliable rounds designed specifically for practice and competition shooting,” said Bud Fini, Sig vice president. “We wanted to give our customers an affordable premium target load that feeds as smoothly as our JHP ammunition and also performs and feels almost identical to the JHP load when shooting. We designed our copper-coated lead bullets to have the most precise, uniform profile and the result is consistent accuracy.”

The new ammo is manufactured to meet or exceed specs by the Sporting Arms and Ammunition Manufacturers’ Institute, are brass-cased and loaded with full metal jacket projectiles.

The P320 is Sig’s first striker-fired service pistol and it’s been widely praised for its modular design and excellent trigger. The P320 has interchangeable slide assemblies and sub-frames and can be converted from sub-compact to full-size and caliber swaps are a breeze. It’s a natural choice for law enforcement as it lets armorer work with officers to configure their duty pistols on a practically individual basis.

The heart of the P320 is its removable one-piece fire control module. Full-size kits can be used to equip patrol officers, shorter and smaller grips can be issued officers with smaller builds, and compact and subcompact kits can be given to detectives and undercover officers — with just one serial number to track per gun, no matter how it is configured and re-configured.

“The P320 has a unique feature that is very appealing to me,” explained Sgt. James Bradley of the Hooksett, New Hampshire, police department. “The metal insert can be interchanged with a smaller handle and can allow a detective who needs a smaller gun to convert the full size weapon to a smaller version and still have the same gun.”

The P320 is getting a lot of traction with police departments across the country looking to upgrade and update their service pistols to a modern standard. Sig has other contracts with law enforcement in Florida, Illinois and Minnesota. People everywhere are picking up P320s not just for their exceptionally consistent, predictable trigger, but also their lefty-friendly controls and solid value.