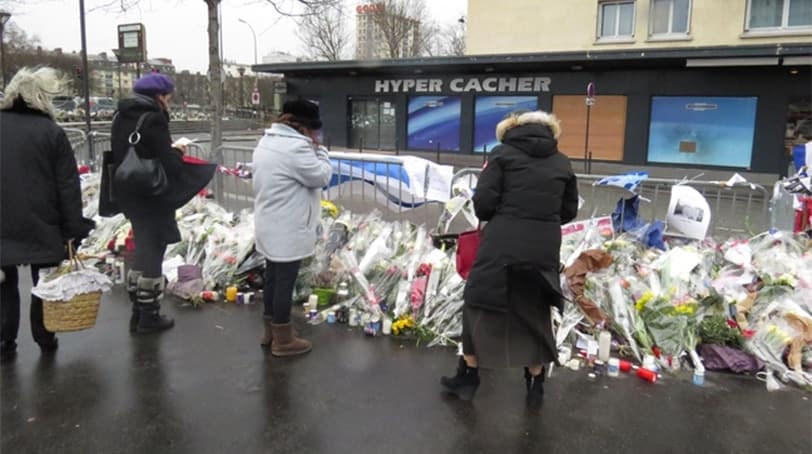 Four people stand in front of piles of flowers and other items in memoriam at the Hyper Cacher, a kosher grocery store in Paris that was the scene of a deadly standoff with French security police on Jan. 9, 2015. (Photo: 20 Minutes)

A group of kosher grocery store shoppers who hid in a refrigerator during the deadly January Islamic attacks in Paris is suing French media for broadcasting their whereabouts and potentially putting them in danger.

“The working methods of media in real time in this type of situation were tantamount to goading someone to commit a crime,” Klugman told AFP.

It’s likely gunman Amedy Coulibaly could have found the stowaways – which included a 3-year-old and a 1-month-old – because he was monitoring news coverage of the event and had even been in contact with BFMTV journalists, Klugman said.

Coulibaly, 32, was reportedly one of four terrorists involved in the deadly attack on French satire magazine Chalie Hebdo, which occurred just two days before the Jan. 9 terrorist attack on the kosher market where he executed four of the 16 hostages taken before security forces killed him.

The terrorist’s two brothers, Said and Cherif Kouachi killed 12 people during the attack on the magazine, the Daily Mail reported.

When asked for comment about the live broadcast, a BFM TV managing editor told French publication Le Parisien that the reporting of the hidden hostages’ location was “inappropriate” and a “mistake.”