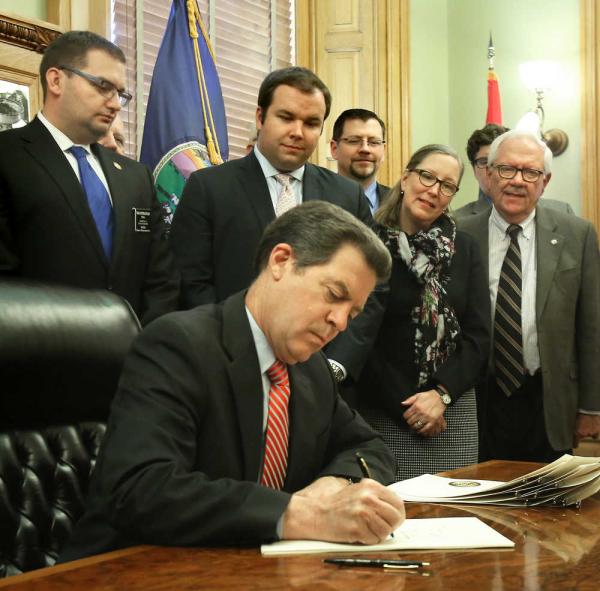 Republican Gov. Sam Brownback gave his signature to a popular bill Thursday to allow lawful concealed carry of handguns in Kansas without a permit starting this summer.

Introduced to the state Senate in January with an impressive 26 co-sponsors, the bill passed that body with ease by a sweeping 31-7 vote before heading to the House in March where it was approved by a healthy 85-39 bipartisan margin.

“Responsible gun ownership, for protection and sport, is a right inherent in our Constitution,” Brownback said at Thursday’s signing ceremony. “It is a right that Kansans hold dear and have repeatedly and overwhelmingly reaffirmed a commitment to protecting.”

The governor also cautioned that, although permitless carry in the state does not come with a training mandate attached, those who choose to protect themselves should seek it out.

“I strongly encourage anyone who has a gun — for protection or sport — to take advantage of existing safety training courses,” Brownback said.

The bill, SB 45, allows any adult otherwise able to possess a handgun under state and federal laws to carry that gun concealed as a matter of course without a permit.

This permitless carry move, commonly called constitutional carry, puts Kansas in the same club started by Vermont and joined by Arizona, Alaska, Arkansas and Wyoming in the past generation.

Since 2006, when the Kansas Legislature passed the Personal and Family Protection Act, an estimated 90,000 residents have applied for a concealed carry handgun license in the state. Some 36 states recognize Kansas permits while the state in turn recognizes all out-of-state permits from non-residents. The new law retains this current permit system to allow for Kansas residents who wish to travel out of state while carrying concealed.

Gun control advocates had harsh words for the new law of the land in the Sunflower State.

“Kansas just became a far more dangerous place today, for law enforcement and civilians alike,” noted the Coalition to Stop Gun Violence in a statement. “Reckless and immoral public policy that will greatly benefit individuals with a history of violence who cannot pass a background check. And leave it to one of the most incompetent governors in this country, Sam Brownback, to lecture reporters about the importance of firearms training during the signing while making sure no one carrying guns in his state will ever have to have any.”

However, gun rights groups, who supported the measure from introduction to governor’s signature, welcomed Kansas to the growing constitutional carry club.

“This new law is a common sense measure that allows law-abiding Kansans to exercise their fundamental right to self-protection in the manner that best suits their needs,” said Chris W. Cox, executive director of the National Rifle Association’s Institute for Legislative Action in a statement.

Further, the NRA pointed out that, far from the sky falling, many states that have switched to constitutional carry in recent years have seen decreases in crime.

“In the three states that have adopted permitless carry laws similar to Kansas’ law, murder rates have gone down; declining by 23 percent in Alaska, 16 percent in Arizona, and eight percent in Wyoming,” Cox said.

Constitutional carry bills have been a popular item nationwide with state legislatures this session. Texas, New Hampshire and Utah have all made progress on measures of their own in recent weeks.

Last month, Montana and West Virginia lawmakers gave their final seal of approval to measures to bring the practice to those states, only to meet with vetoes from Democratic governors who cited safety concerns as a reason to torpedo the reforms.

Possibly the seventh state to join the constitutional carry club may be Idaho, which has a bill to allow the practice currently on Republican Gov. Butch Otter’s desk in the face of objections from gun control advocates.