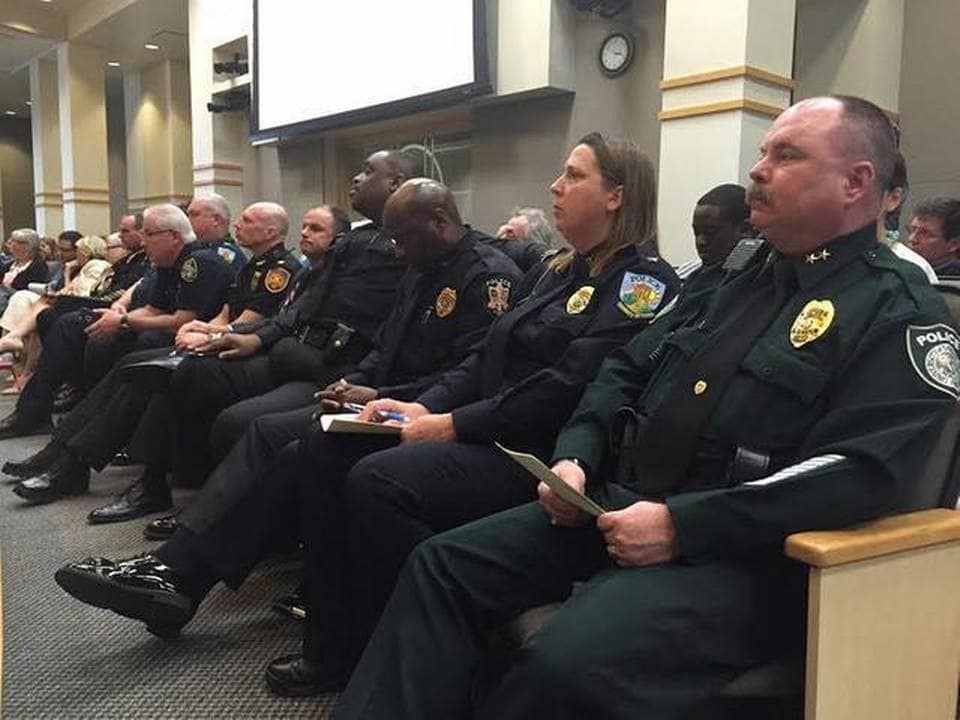 Ten campus police chiefs are facing ethics complaints after a number of them traveled to Tallahassee in uniform to oppose the campus guns bill. (Photo: Kathleen McGrory/The Miami Herald)

A gun rights group has filed formal complaints with the Florida Ethics Commission over questions of whether nearly a dozen public college and university police chiefs testified against gun bills on the public’s dime.

At the heart of the matter are questions brought by Florida Carry, a Second Amendment organization in the Sunshine State that supports, along with others, a series of bills currently in the legislature that would allow concealed carry on the state’s school grounds. The group argues that the chiefs in question, who testified against the bills, did so inappropriately and not as registered lobbyists.

“These chiefs used state resources and were on state taxpayers’ time to lobby the Legislature against the rights of citizens,” Eric Friday, an attorney for the group, told the Sarasota Herald Tribune. “The statutes require that if a state employee is going to lobby during business hours, they’re expected to register as a lobbyist. None of the people we filed complaints against are registered as lobbyists in Florida.”

The 10 named in the complaints obtained by Guns.com include the chief law enforcement officers from two of the largest public university campuses in the country; Chief Darren Baxley from the University of Florida and Chief David Perry from Tallahassee-based Florida State University along with his deputy chief.

According to Florida law, any state college or university employee that seeks to, “encourage the passage, defeat, or modification of any legislation by personal appearance or attendance,” in front of the state legislature has to register as a lobbyist. Further, they have to record the hours spent as a lobbyist and cannot be paid by the state for them.

All of the named registered to speak against the measures that have been winding their way through the state legislature in recent months following a high profile shooting at FSU in which one of those injured by a gunman’s bullet was a concealed carry advocate who had been disarmed due to the school’s gun free zone. Friday contends that he would have filed complaints for improper lobbying even if the chiefs had spoken out in support of the pro-gun measures.

According to the Tallahassee Democrat, similar ethics complaints against 21 university employees to include professors and administrators are being compiled by a Scott Barrish, a private citizen, who feels that the faculty lobbied out of compliance with state regulations.

While most school officials are not commenting, those who are support the actions of their chiefs and contend everything is above board.

“We’re optimistic the Ethics Commission will find no improprieties,” FSU President John Thrasher said in a statement. “We would not have done anything differently. When we’re invited to appear as a professional, expert witness before the Legislature, we accommodate the request. Furthermore, I’m disappointed anyone would file a complaint against such a distinguished law enforcement officer.”