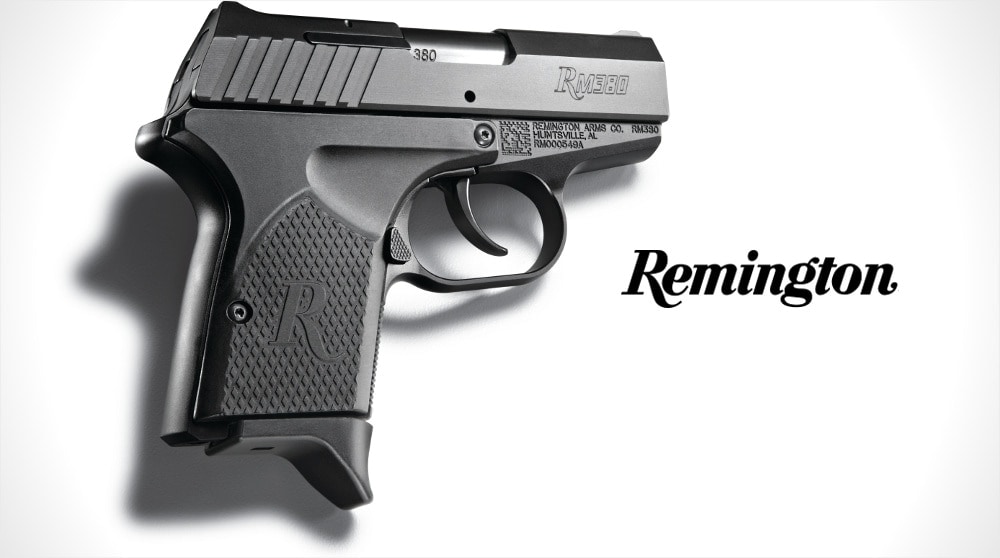 The upcoming RM380 with the extended floorplate. (Photo: Remington)

The market for light handguns chambered for .380 ACP is pretty crowded but Remington believes the RM380 has a chance owing to the all-metal design and true double-action only trigger. A hammer-fired pistol the RM380 has second-strike capability in case of primer malfunctions.

The double-action only trigger acts as the gun’s primary safety for users who refrain from manual safeties on carry guns and makes it possible to pocket-carry the RM380. The gun has an ambidextrous magazine release and a recessed right-handed slide stop lever. The RM380 will lock open on empty like larger pistols.

It’s a comfortable size measuring in at 5.3 inches long and 3.8 inches tall. The RM380 has an above-average barrel length at 2.9 inches and it has a 6+1 capacity. Remington plans to ship the RM380 with two magazines, one flush and the other with a slight finger extension. 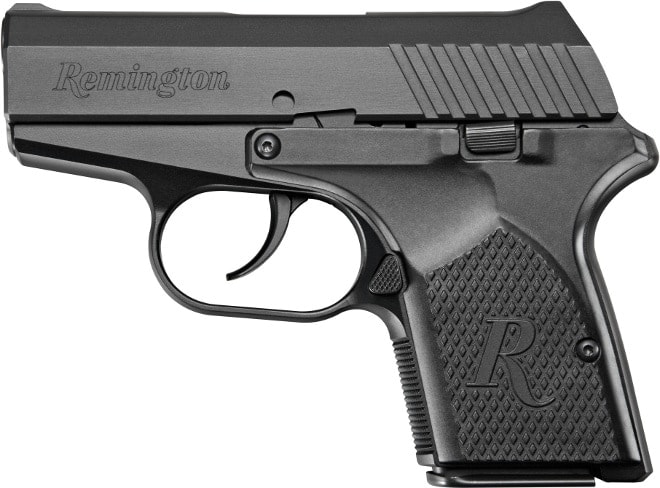 The RM380 from the left with the flush magazine. (Photo: Remington)

The RM380 has low-profile fixed sights machined into the slide that are designed to prevent snagging on the draw. The RM380 is sighted in at 10 yards, which is more than enough for the majority of self-defense use.

This pistol is tailor-made for a subset of the concealed-carry market. The RM380 is perfect for shooters who don’t want a polymer-framed handgun or a striker-fired handgun, instead opting for a more traditional-style pistol.

Where the RM380 stands out against older .380 ACP designs is that it uses a locked-breech operation for reduced recoil and less slide mass for softer shooting. This gun is suited for people who like the idea of metal-framed DAO pistols but can’t stand the associated recoil of blowback designs.

The RM380 has a few other tricks up its sleeve to give users a strong, solid grip, including a checkered frontstrap, undercut trigger guard and an extended beavertail. It has interchangeable grips for people looking to customize their RM380s with thicker or thinner grip panels and a dual-spring recoil assembly to help reduce felt recoil.

The RM380 is the second new gun to come from Remington recently. This time last year the company launched the R51, a modern take on a classic design. Unfortunately quality control and build issues prevented the gun from succeeding and Remington later recalled the pistol. The company plans to re-launch the R51 this year at about the same time as the new RM380.

Remington has some work cut out ahead of them as far as regaining some consumer trust following the troubled history of the R51, which is still on-going to this day. But Remington’s making it easy to give them a second chance with the RM380 based on its low price alone. Remington set the MSRP on the Model RM380 at $417 and street prices are expected to list in the upper $300 range.

The RM380 will be on the spotlight this weekend at this year’s NRA Annual Meeting and we’ll find out more very soon.