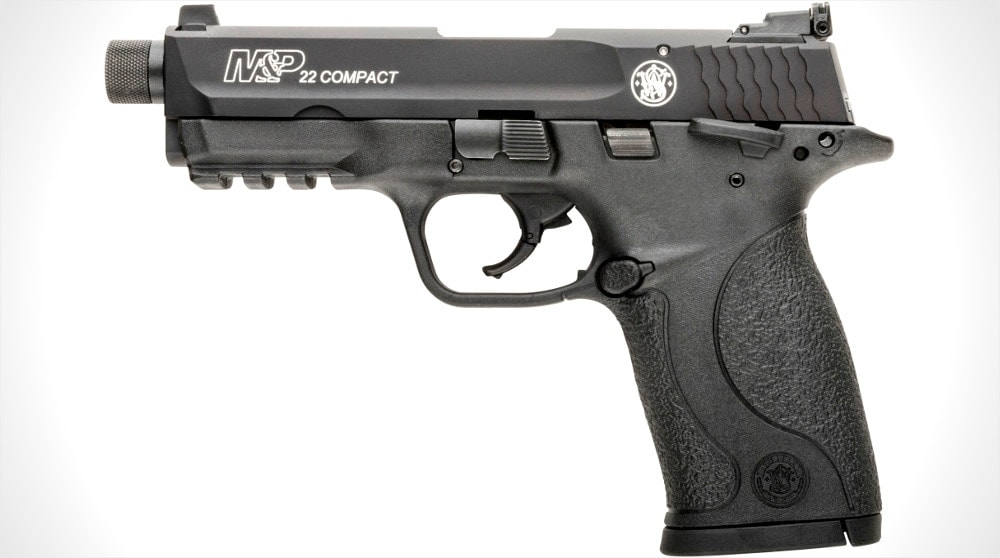 Smith & Wesson is expanding on their latest .22 LR pistol, the M&P22 Compact, with a new model featuring an included barrel adapter for running suppressed.

The goal of the M&P22 Compact is to “make fun funner” and suppressed it’s sure to succeed. “The acceptance of sound suppressors across the shooting sports continues to gain momentum as a growing number of today’s firearm owners have been able to use these devices and see firsthand their effectiveness in reducing noise,” said Laurel Smith, brand director for Smith & Wesson. “This new version of our tactical M&P22 Compact delivers the must-have features that fans of M&P pistols have come to expect combined with the ability to add a suppressor with minimal effort.”

The M&P22 Compact Suppressor Ready has the same polymer frame and aluminum slide construction that makes the original so light and comfortable to shoot but adds the adapter kit for the threaded carbon steel barrel along with tools to assist with installing and removing the adapter.

Other specifications include an overall length of 6.6 inches including the 3.6-inch barrel and a width of 1.5 inches at the safety levers. The pistol weighs just 15.3 ounces making it one of the lighter .22s out there, although with a can it’ll weigh a bit more. The M&P22 Compact Suppressor Ready is essentially identical to the original Compact but includes a barrel adapter for 1/2×28 suppressors and suppressor adapters, and it has the same 10+1 capacity.

Made here in the States these compact pistols sport an extended manual safety in addition to the passive trigger safety. These guns are range guns and make do as kit guns and as such a thumb safety is right at home on this practical plinker along with the adjustable target sights. Like the full-size M&P pistols it also has an accessory rail for use with a weaponlight or laser sight.

The M&P22 Compact Suppressor Ready is priced right with an MSRP of $409, meaning real-world prices should be in the mid- to upper-$300s. There’s good news for existing M&P22 Compact owners as S&W will also be selling suppressor adapter kits for these guns for just $39. Again, that’s MSRP so in-store prices are expected to be less than that. The standard M&P22 Compact has a suggested price of $389, making this a pretty solid deal for people who already own a silencer or plan to.

These guns make great hosts for suppressors for users uninterested in common .22 pistols like the Ruger Mark series and Browning Buck Mark family. While they don’t provide a one-to-one shooting experience to their bigger M&P relatives they teach the same trigger control with their 5.8-pound trigger pull.