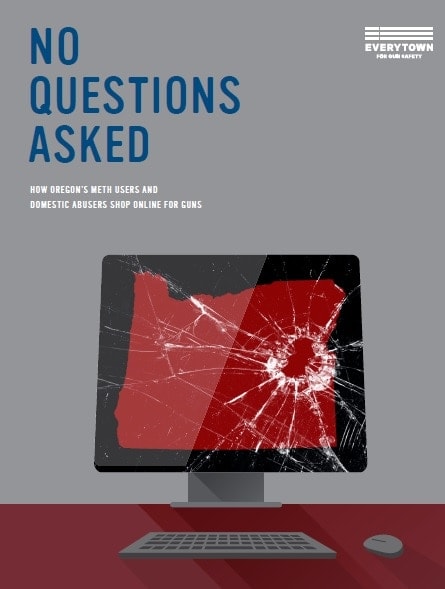 Bloomberg-financed Everytown, taking a page from its Washington and Vermont playbooks, released an investigative study that contends some 5 percent of potential online gun buyers in Oregon are criminals. (Image: Everytown for Gun Safety)

Following on the heels of similar controversial efforts in other states to support expanded background checks, a gun control group released a report this week contending one in 18 private sales in Oregon are to those who can’t legally own a gun.

The operation, set up by former New York Mayor Michael Bloomberg’s Everytown for Gun Safety, targeted online buyers in the state as part of its “No Questions Asked” project.

As part of the group’s investigation, conducted over a 217-day period of four online gun classifieds sites, the group scraped thousands of ads for firearms being sold by private sellers in Oregon, and then extrapolated enough data to cite that some 14,916 private ads were placed.

Private investigators were then brought in who placed 17 ads between Nov. 11 and Dec. 18, 2014, offering firearms for sale that did not exist. From the 203 responses received to the ads from interested buyers that the investigators could identify through names and phone number searches, the group ascertained that 11 of those individuals researched – or about 5 percent – were possibly prohibited from firearms possession.

The group contended that these 11 included domestic abusers, felons, meth addicts and at least one person with a restraining order against him. Comparing the responses per fake ad placed by the investigators with the number of estimated private ads in the state, they group concluded that an projected 1,360 guns a year could be transferred to prohibited people.

“This investigation highlights something we’ve known for a long time – that the online market for guns leaves a gaping loophole for criminals and other dangerous people to buy a gun without a background check,” said Sarah Finger McDonald, with Moms Demand Action, part of the Everytown group in a statement accompanying the report.

The solution to the problem as highlighted by the gun control organization? Pass a polarizing piece of legislation currently in the state Senate that would mandate background checks on most private firearms transfers.

“Moms, faith leaders, law enforcement officers, prosecutors, survivors and responsible gun owners from all walks of life and every corner of the state have come together to support SB 941, a comprehensive background check bill, because we know it will close this online sales loophole and help prevent crime and save lives,” McDonald said.

This is not the first time that Everytown has mounted an internet investigation in a state where it was funding an enhanced background check initiative. In September 2014, just six weeks before a voter referendum on background checks in Washington state, the group released a study that contended one in 10 private online gun sales were to criminals.

Gun rights advocates argued that in that instance, of the 16,739 online advertisements, the group found just eight individuals that had been convicted of crimes that prohibited them from possessing firearms, or about 0.005 percent, not the much larger 10 percent figure claimed by Everytown.

The Bloomberg group followed this up in January 2015 with a report in Vermont that claimed as many as one in 24 private sales could be to prohibited possessors.

That study soon found itself at the center of threatened litigation when it was discovered that the gun control group used a series of photos from a real gun shop in their fake ads that retained the shop’s watermark and name. This led to a correction of the data collected by Everytown.

Oregon’s background check legislation passed the Senate Judiciary Committee on Monday following a party-line vote of 3-2 and now heads to the floor. Democrats, a party affiliation that is shared by Gov. Kate Brown, control both chambers of the state legislature.