Action Figure Therapy is making it even easier to show your love with new, lower prices on their expanded line accessories and apparel. These prices won’t last for long so if you’ve been eyeballing one of their hilariously inappropriate tees or hoodies now’s the time to buy.

AFT is a web series depicting the lives of protagonists like AFT Ranger, Marine and of course, Jungle, as seen through the eyes of their counselor. Each has their own set of issues and quirks that are guaranteed to entertain everyone. Well, everyone who like their comedy blue.

As a thank-you to their fans everywhere the AFT team has dropped prices on their men’s and women’s tees to $15 and the bulk of their hoodies to $30. All orders above $75 are eligible for free shipping with the “SHIP75” promo code. 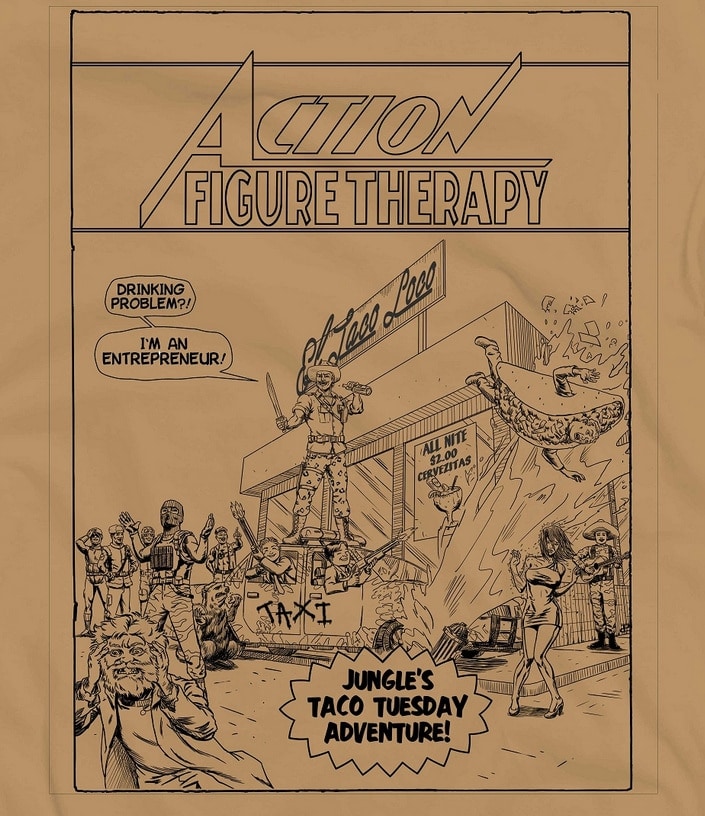 “We had a couple sponsorship deals earlier this year that helped alleviate AFT’s financial obligations so we’ve decided to pass this small windfall onto our fans,” explained AFT in a statement. “Because you all f–king rule.”

This includes two new t-shirts featuring original artwork AFT commissioned illustrating scenes from AFT shorts. One is a comic-book cover design based on AFT’s “Drinking Problem” episode featuring Jungle, Ranger, Stanley and the rest of the AFT crew and the other other is a six panel comic outlining the dos and don’ts from Jungle’s “Strip Club Etiquette” episode.

To watch these videos and more head over to the Action Figure Therapy YouTube channel, provide you don’t need to get anything done soon, and to order real-world AFT swag and clothes visit the AFT web store.

The team is also announcing that they’ve reached a milestone with their soundboard apps for iOS and Android. The AFT crew has cut and edited over 100 clips and sound bites from episodes featuring ATF Ranger for a third soundboard app. They’ve built two other soundboards with Jungle and Marine that let users play any of their unique quips and aphorisms whenever they feel like bringing a little AFT charm to the room.

The Ranger soundboard is almost complete and will soon be available for mobile devices everywhere, and like the first two soundboards, will be completely free to use.

It’s complete with gems like “Suck It, Hippie,” “Reap The Whirlwind” and, of course, “Big Fricken’ Whoop.” If you’re an AFT fan there’s no reason not to use these life-enriching apps every day and at every possible opportunity.