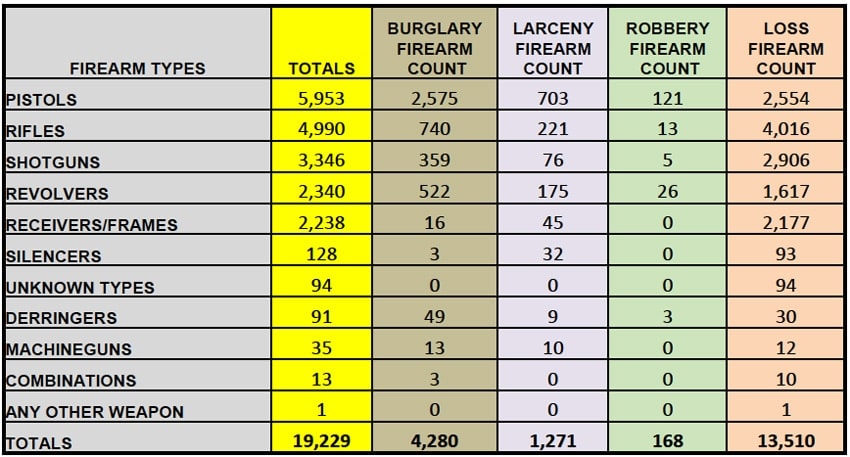 More than 19,000 firearms were lost or stolen across the U.S. in 2014, according to a new report Tuesday by the Bureau of Alcohol, Tobacco, Firearms and Explosives.

The ATF collected data through the Firearms Tracing System, which keeps track of guns missing from licensed firearm dealers, between Jan. 1, 2014, and Dec. 31. Of the 19,229 lost or stolen guns, the majority were handguns, which accounted for 8,293, rifles made up 4,990, and shotguns made up 3,346.

Other firearms stolen included 2,238 receivers, 128 silencers, 94 unknowns, 91 derringers, 35 machine guns, 13 combinations, and one any other weapon.

Also, the majority of the total were considered lost firearms, which accounted for 13,1510, whereas 5,719 guns were reported stolen.

On Jan. 16, 2013, President Barack Obama announced a plan to reduce gun violence in the U.S. that included the Justice Department preparing a report analyzing information on lost and stolen guns and to make the report widely available to law enforcement.

In response to the president’s directive, the annual FFL Theft/Loss Report was created. This report gives a calendar year overview of the lost and stolen firearm reports submitted by FFLs to ATF.