A study published this month in Behavioral Sciences and the Law indicates that in the fight against gun violence, the current focus on mental health may be misguided and the focus should instead be on those with a history of explosive anger, which, according to the study, are groups of people who often are not prohibited from possessing firearms.

“As we try to balance constitutional rights and public safety regarding people with mental illness, the traditional legal approach has been to prohibit firearms from involuntarily-committed psychiatric patients,” said Jeffrey Swanson, a professor in psychiatry and behavioral sciences at Duke University and lead author of the study. “But now we have more evidence that current laws don’t necessarily keep firearms out of the hands of a lot of potentially dangerous individuals,” he wrote.

The study, which was conducted by researchers at Duke, Harvard and Columbia universities, analyzed data from interviews with 5,563 individuals, as well as household surveys conducted in the early 2000s by the National Comorbidity Study Replication, a representative survey of mental health disorders in the United States.

Participants were asked about anger issues and those who were determined to be high risk admitted that they sometimes had tantrums or angry outbursts, sometimes broke or smash things while angry, and/or lost their temper and got into physical fights. Furthermore, the study found that those high risk individuals tended to be young or middle-aged men who were married and living in the suburbs.

These approximately 22 million individuals, who are considered high risk, make up roughly 8.9 percent of the adult population, and according to the data collected, about 3.7 million of them routinely carry guns in public.

In addition, most individuals who were determined to be high risk were gun owners, according to the data. 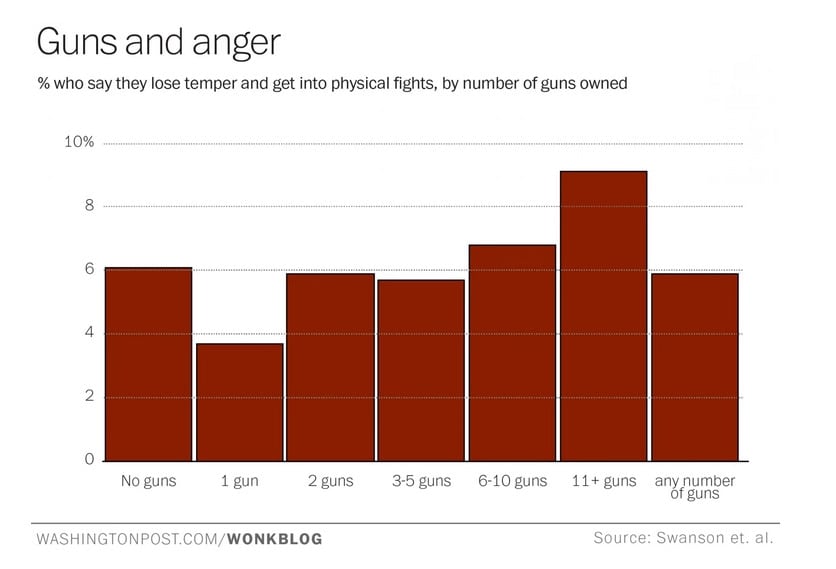 “What I really wanted to do here was get away from the focus on mental illness because what you realize is that it’s a very minor part of the problem with overall violence,” Swanson said. “Most people who commit crimes don’t have a serious mental disorder, and most people who have a mental disorder aren’t violent.”

In fact, crime carried out by those with severe mental illness only contribute to about 4 to 5 percent of overall violent crime, according to the study.

“When there is a horrifying mass casualty shooting or homicide, it’s terrifying and unpredictable. People look at that and say it was such a deeply irrational, harmful act that it must have been done by a really mentally disturbed person,” Swanson said. “But then they take that and overgeneralize it. People act on the basis of what they believe to be true, and they might be likely to discriminate against people with mental illness, treating them with scorn and supporting policies that take away their civil liberties.”

But Swanson also warned that those who were considered high risk, exhibited more than just typical irritation and agitation. He described their behavior as impulsive, out of control, destructive and harmful.

“You and I might shout,” he said. “These individuals break and smash things and get into physical fights, punch someone in the nose.”

And while the study found that there were sometimes overlaps with people with both serious mental illnesses and violent behaviors, they only made up a small fraction of those considered high risk. The overwhelming majority haven’t been diagnosed with a severe mental illness which would typically result in involuntarily commitments or otherwise prohibit them from owning guns.

Swanson believes that it could be more effective to, instead of looking at mental health history, look at a prospective gun buyer’s record of misdemeanor convictions that could indicate impulsive, explosive and violent behavior.

“To have gun violence you need two things: a gun and a dangerous person,” Swanson said. “We can’t broadly limit legal access to guns, so we have to focus on the dangerous people.”