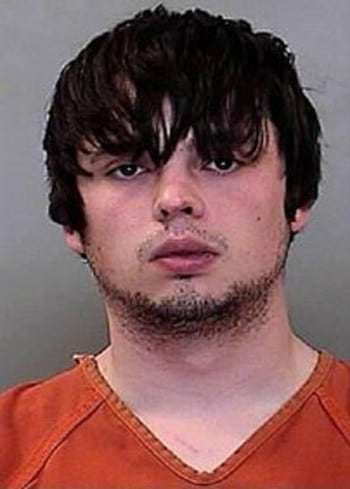 Caleb McDonald is from Ohio, and authorities still have no motive in the stabbing. (Photo: Buffalo County Sheriff’s Office)

A suspect who was savagely stabbing a man as his two children watched in horror was stopped with the help of the owner of a nearby furniture store who held the suspect at gunpoint until police arrived.

Johnny Quintana was delivering newspapers Friday afternoon, April 3, in Odessa, Nebraska, when he noticed a young man pulled over on the side of the road. Quintana stopped, asked him if he needed help, and when he said no, Quintana carried on with his paper route.

But the man, who was later identified as 18-year-old Caleb McDonald, followed Quintana, who had his two children, ages two and 14, with him at the time.

Quintana then pulled over into a parking lot and exited his vehicle. McDonald did the same, and when the two men met up, McDonald began stabbing Quintana with a knife.

Even after being stabbed multiple times, Quintana was able to pin McDonald to the ground, but as he was struggling to keep him subdued, the owner of a local furniture store was returning from lunch when he saw the incident and intervened, local media reported.

McDonald was arrested and charged with first degree assault, possessing a deadly weapon while committing a felony and issuing terroristic threats. He is being held on a $500,000 cash bond.

Quintana, who was stabbed a total of nine times, was transported to a local hospital, but has since been released and recovering at home.

Gerdes, a National Guard sergeant who served in Kosovo and Iraq, said sometimes bad things happen unexpectedly and that’s why he keeps a gun at his store.