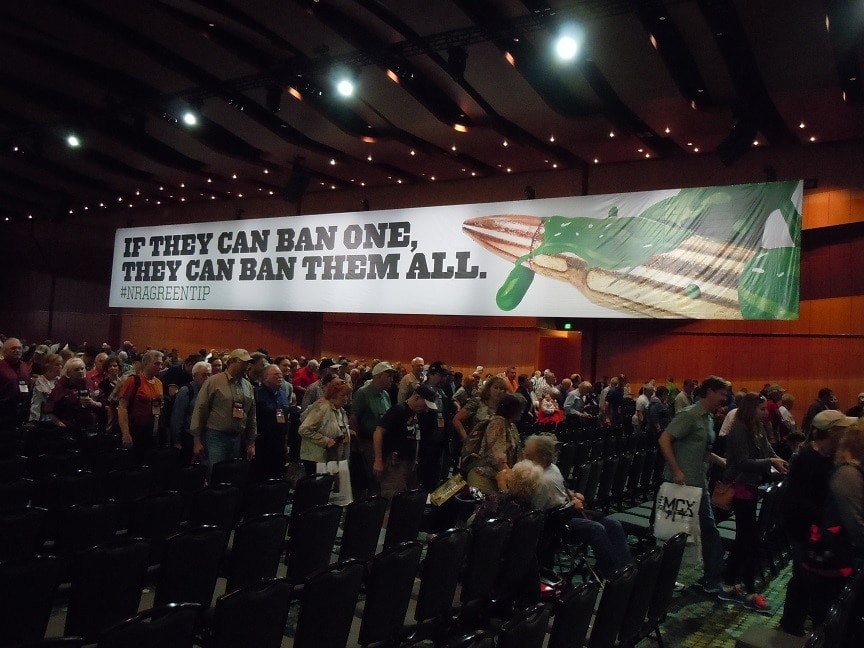 A crowd of NRA members and guests crowded into the Grand Ballroom of Nashville’s Music City Center to hear from GOP Presidential hopefuls under a banner referencing green tip ammunition. (Photo: Chris Eger/Guns.com)

Friday’s National Rifle Association’s Leadership Forum speakers ranging from gun rights advocates to Sheriff Clark and GOP Presidential hopefuls made clear that the controversy over M855 ammunition has not been forgotten.

In use as cheap range ammo for AR-15 series firearms, the “green tip” round sprouted from relative obscurity and gained national attention earlier this year after a proposed rule change by the Bureau of Alcohol, Tobacco Firearms and Explosives was announced. Earning rapid opposition from Second Amendment groups, gun owners and Republican lawmakers, the ATF backpedaled and postponed any change while agency director B. Todd Jones quietly resigned his position following calls for his removal.

The apparent victory did not go unnoticed at the forum, part of the NRA’s Annual Meeting and Exhibits this week in Nashville, Tennessee.

Alongside an immense banner featuring a cartridge coated in green paint reading, “If they can ban one they can ban them all,” several notable speakers at the event worked references to the 5.56mm ammunition alongside barbs at Democrats and hopes for a different political reality in 2016.

“We showed President Obama exactly how vast our movement is,” said Gov. Bobby Jindal, R-Louisiana to a cheering crowd. “When he tried to ban green-tip ammo, we rose up and stopped him!”

Jindal, the first to mention M855 by name at the event, was far from the last.

Sen. Marco Rubio, R-Fla, listed the move to potentially regulate the cartridge as an example of the administration of President Obama attempting to limit the Second Amendment.

“The President has no authority to tell a hunter, a sportsman, or any law-abiding American what kind of weapon is right for him or her,” said Rubio. “And it’s bad enough that this administration has attempted these very things in routine moments, for example with the failed ammunition ban earlier this year.”

Besides the candidates, NRA President Jim Porter also referenced the green tip fight in his remarks to the crowd.

Milwaukee County Sheriff David Clarke, who fought off a Bloomberg-funded campaign against him for reelection last year through the help of NRA support, even proposed adding green tip to the Great Seal of the United States.

“You know, the one with the American bald eagle holding an olive branch in one claw and arrows in the other,” said Clarke. “We should take those arrows out of the eagle’s claws and replace them with a semi-automatic rifle, preferably one that shoots M-855 ammunition.”

Since the ATF’s postponement on a regulatory change to the ammo, 23 state attorneys general have signed a letter urging the agency to permanently discard any attempted reclassification on the cartridge while Democrats on Capitol Hill have called for an outright ban.