Ted Cruz on gun control: 'Come and take it' (VIDEO) 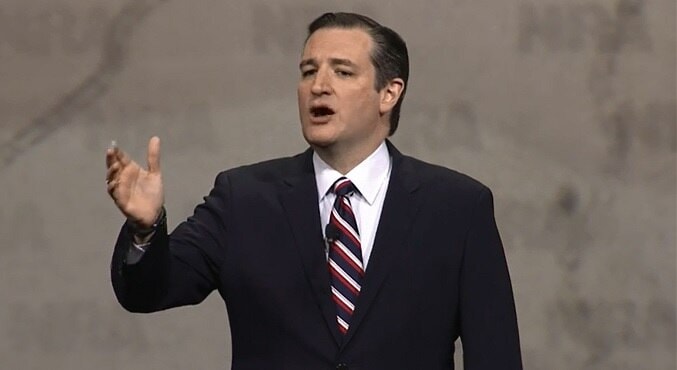 Republican U.S. Sen. Ted Cruz made his case for a 2016 presidential bid to a crowd at the National Rifle Association’s Leadership Forum last week by invoking the rallying cry of the Texas Revolution.

Cruz, the junior senator from Texas, spoke in front of a crowd of some 4,000 during the NRA’s 144th Annual Meeting and Exhibits in Nashville as the final of 11 potential GOP candidates who addressed the pro-gun group on Friday afternoon.

In his nearly 20-minute speech, the 44-year-old Harvard alum paced the stage and worked the crowd, delivering his Second Amendment resume to those in attendance.

First, he noted that as Texas Solicitor General in 2008 he drafted a pro-gun amicus brief in the Heller v DC case that earned the signatures of 31 state attorneys general to uphold the right to keep firearms in the home for self-defense.

Then, he mentioned his role in 2013 along with Sens. Mike Lee (Utah) and Rand Paul (Ky.) in threatening to filibuster controversial gun control legislation following the mass killing at Sandy Hook Elementary in Newtown, Connecticut.

Of those who supported the measures in the failed Manchin-Toomey expanded background check vote, he noted that, “Heaven and earth descended on those senators,” alluding to the poor reelection record of many incumbent lawmakers who supported it in last year’s mid-term cycle.

In his final talking point on guns, interlaced between language on executive amnesty, Obamacare and Iran’s nuclear talks, Cruz floated  the often-recounted rallying cry of the Gonzales cannon incident of 1835. In that historical event, often cited as one of the opening moves of the Texas Revolution, settlers refused to give back a cannon loaned to the people of Gonzales by the Mexican Army, raising a simple flag reading, “Come and Take It.”

“If Hillary Clinton is going to join with Barak Obama and the gun grabbers and come after our guns, then what I say is ‘Come and Take it,'” said Cruz, winding up his remarks. “If they are going to come after the Constitution; what the American people, what we say together is ‘Come and Take It.'”

Former Secretary of State Hillary Clinton officially launched the start of her campaign for the 2016 Democratic nomination via You Tube on Sunday afternoon.

“Everyday Americans need a champion, and I want to be that champion,” Clinton said.