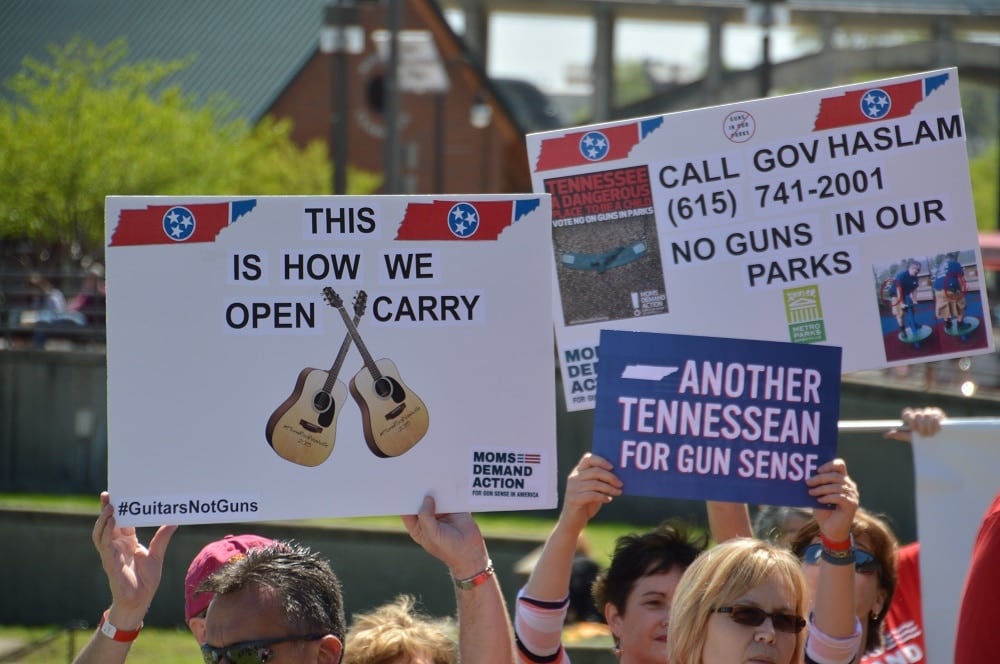 Tennessee’s guns in parks legislation is caught between a legislature that is in disagreement, a governor that doesn’t like it, and a power play between gun rights and gun control advocates. (Photo: Chris Eger/Guns.com)

What started as simple legislation to expand concealed carry rights to public parks in the state has earned the attention of national gun control groups and risks a veto from Republican Gov. Bill Haslam.

The proposal was introduced to the state House in February and passed by a 65-21 vote on March 30. In its journey through the Senate, the measure passed on April 2 by an easy 26-7 vote, but picked up an amendment to include striking the gun free zone at the State Capitol, which the House in turn rejected.

Now, facing a conference committee, the governor is making it known that he may oppose it should it reach his desk.

“I think it’s fair to say, particularly with the part about the Capitol, we have some major concerns,” Haslam said last Monday on the eve of the National Rifle Association’s Annual Meeting and Exhibits scheduled for Nashville, to which the governor was not invited to speak.

Haslam, as mayor of Knoxville in 2009, presided over a city council that retained a local ordinance that made city parks off limits to concealed carry holders.

The bill in question, HB 995, would remove the current Tennessee law that allows local city and county governments to prohibit a permit holder from carrying a handgun in a public park that is owned, operated or used by that local government. It also makes it a misdemeanor for anyone to bring a fake firearm, sword or explosive device within 150 feet of a school, while exempting legally carried firearms.

With Haslam waffling, national gun control advocates holding a protest to the NRA event in Nashville on Saturday made the guns in parks legislation a rallying cry.

Organizing at Riverfront Park within walking distance of where GOP presidential hopefuls addressed a strong pro-Second Amendment crowd, Moms Demand Action leader Shannon Watts and about 100 supporters urged the governor to veto the bill should it reach his desk as part of their larger gun violence agenda.

For the bill to make it to Haslam’s desk, a final version would have to be hammered out by state lawmakers. To this, the Tennessee lieutenant governor is hopeful.

“I want the guns in parks bill to pass. I don’t want the governor to veto it or become law without his signature,” Lt. Gov. Ramsey said last week. “I think we will get something out of conference committee that will be palatable to both houses.”

The NRA for their part support HB 995.

“The current law allows for a patchwork of firearm regulations throughout the state where a law-abiding Tennessean with a valid Handgun Carry Permit may unknowingly and unintentionally break the law,” reads a legislative alert issued two weeks ago by the gun rights organization, who saw 70,000 members flood Nashville. “Current law does nothing to address crime and only impacts responsible, law-abiding gun owners.”

The measure, rejected by the House, is on the Senate message calendar awaiting further action.