Navy Vet gets help from SAF after gun confiscation 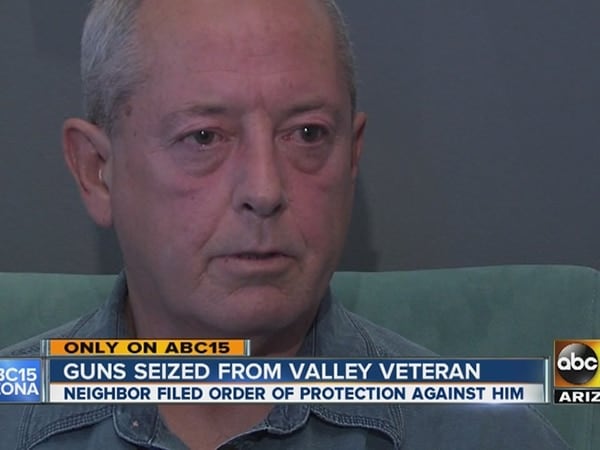 Rick Bailey had his entire gun collection confiscated after his neighbor filed an “injunction against harassment” against the 56 year old Navy veteran. Bailey had complained about the neighbor parking dump trucks with strange odors around his property.

The Second Amendment Foundation put out a press release recently announcing  that they will be taking on the case of a Navy vet who had his guns confiscated by authorities. The retired Glendale, Arizona vet had his entire gun collection seized by police because his neighbor filed an order of protection against him stemming from a complaint dispute.

Fifty-six year old Rick Bailey, a retired software engineer, complained to the city of Glendale’s law enforcement for months about his neighbor parking dump trucks he uses for his landscaping business in an irritating manner around his property. He also called the police on several occasions about an odor coming from his neighbors property that he thought could potentially be toxic (Bailey claims he was forced to use an inhaler at various times while sitting on his patio as a result of the fumes). When the city demanded he move the trucks, Bailey’s neighbor retaliated by first complying with the court’s request, but then returning the trucks over periods when the city offices were closed to the public.

This is when Bailey allegedly sought revenge.

The neighbor claims Bailey threatened to shoot him and, in response, filed an “injunction against harassment” to obtain an order of protection against him. Shortly after–and despite the fact that the order of protection omits the charge that Bailey threatened to shoot his neighbor–police showed up at Bailey’s home and removed every gun from the premises.

Bailey categorically denies the allegations that he threatened his neighbor and no proof exists to show otherwise; in fact, Bailey’s neighbor never actually mentioned the above threat complaint in his paperwork seeking an order of protection. Still, this claim was enough for an Arizona judge to issue both a protective order and an order of confiscation.

The SAF is now working with attorney Mark J. Victor to assist in the return of Bailey’s 28 firearms, which took him over a decade to collect and that were valued at over $25,000.

“We seem to live in an environment when someone’s life can be turned upside down on an allegation that should have been thoroughly investigated before any action was ordered by a court.” Sadly,” he continued, “this kind of hideous gun confiscation flies below the radar and it is happening more frequently to gun owners across the country.

Bailey had to retire from his job due to a disability from a back injury that also resulted in his medical discharge from the Navy after four years of service,” he noted. “He couldn’t physically harm anybody. This situation appears to have gotten out of control,” Gottlieb observed. “A generation ago, neighbors solved this kind of dispute over a cup of coffee or a Sunday barbecue. We’re helping Bailey in his appeal of the judge’s order so he can not only reclaim his valuable firearms, but also some of his dignity as well.”

I find it to be a chilling sign of the times when all one must do is upset a neighbor to have all of their guns confiscated by agents of the law. Keep in focus that the threat complaints recorded by police were never proven or even actually included in the paperwork filed to the courts by Bailey’s neighbor, yet a judge still saw cause to have Bailey’s guns seized the very next day. With such swift and decisive action predicated on hearsay, it begs the question, is the desire for revenge enough to have a person’s property removed nowadays?

No matter how you cut it, Bailey’s rights were violated and to my mind in the most egregious way–not out of fear or concern but out of anger.  For his own concerns over public safety, he was punished and further humiliated for asking law enforcement to help with a potentially toxic substance.  Of course, the part that says “shall not be infringed” comes to mind, but I think this sad story shows that not all judges uphold the Constitution.  It is also painfully obvious that any gun-owner in a dispute or a situation that upsets another party must now worry about weapons confiscation.

In theory, the protective order is only valid for one year, after which police must return Mr. Bailey’s firearms–but as we all know a lot can happen in a year and the Navy vet wants his property back now.  A GoFundMe page has since been started to raise money for legal fees in the case.

Lastly, I want to say a special thank you to the SAF for standing up for Mr. Bailey in this attempt to have his weapons returned to him.  Hopefully they can help him recover some stolen dignity.

To join and donate to the Second Amendment Foundation (SAF), click here.