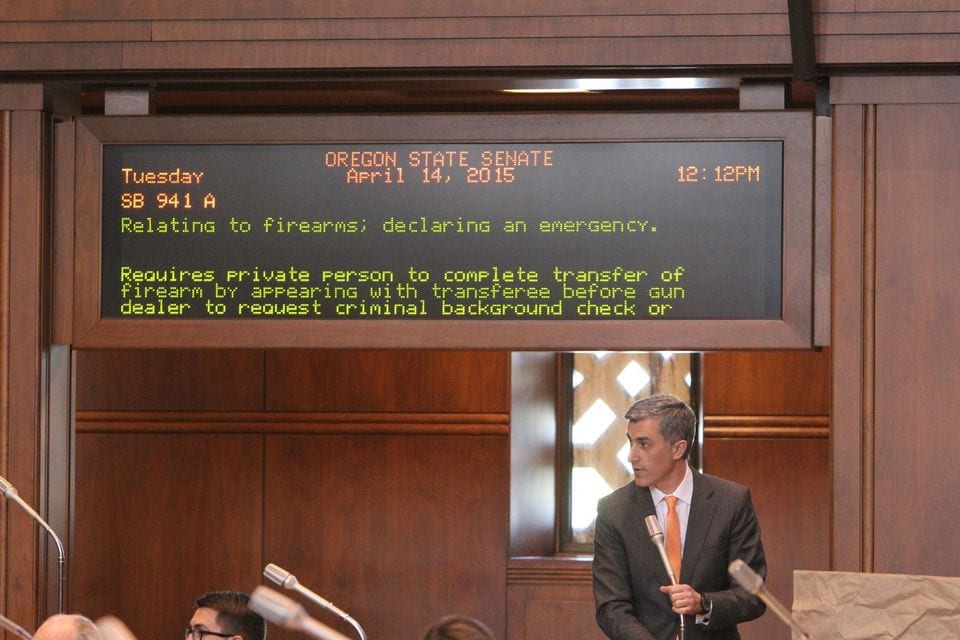 Debate on a bill to bring background checks to all gun sales did not earn a single Republican vote in Oregon’s Senate Tuesday. (Photo: Jan Kullgren/The Oregonian)

In a partisan move, Oregon Democrats gave their seal of approval Tuesday to legislation championed by gun control groups that would mandate background checks on most gun transfers.

The measure, introduced last month as the “Oregon Firearms Safety Act,” passed the Oregon Senate by a 17-13 vote with one chamber Dem jumping ship and casting her vote with the opposition Republicans.

“What we will do is take one step to close a major loophole which is a floodgate for allowing these types of transactions where people who are not supposed to have guns have easy access to guns,” said bill sponsor Sen. Floyd Prozanski, D-Eugene, as reported by KATU.

The proposal, SB 941, in its current version would require that all private gun sales take place through licensed firearms dealers who would perform background checks. There are some exceptions for family transfers, law enforcement, and – in some cases – inherited firearms.

Republican senators argued that the bill is unneeded and would only effect law-abiding citizens who would be further burdened with fees and paperwork when selling a firearm to a friend.

The latter has funded studies into online gun sales in the state that contend as many as one in 18 potential gun transfers are to those who cannot legally own them while simultaneously funding a series of television ads selling background checks as a cure for gun violence.

“Oregon Moms are proud to see that the Senate stood on the side of public safety by voting to close the loophole that makes it easy for convicted felons and other dangerous people to get guns,” said Anneliese Davis, with the Oregon chapter of Moms Demand Action in a statement emailed to Guns.com. “Now it’s time for the House to do the same and take this important step to help keep our families and communities safe from gun violence.”

The measure has proven controversial in the state and some elected sheriffs are already publicly vowing to not uphold its tenets should it become the law of the land.

“I can’t enforce that law, so therefore it won’t be enforced. It doesn’t fit on my scale of priorities,” Josephine County Sheriff Dave Daniel told the Daily Courier this week. “I have felonies going on daily in Josephine County. That’s my priority.”

Gun rights advocates, who oppose the legislation, stress that the apparent success in Oregon is a harbinger of things to come in future years.

“Oregon was one of the few states where we lost ground in the last election,” Alan Gottlieb, chairman of the Citizens Committee for the Right to Keep and Bear Arms, told Guns.com. “This is a result of that loss. Gun owners must turn out to vote in 2016 in record numbers or this could happen all across the country.”

Gottlieb made quick comparisons to a Bloomberg-backed ballot referendum that passed in neighboring Washington state last November that has already seen court challenges.

“This legislation is every bit as badly written as Initiative 594 was in Washington state. It criminalizes lawful behavior,” Gottlieb said.

The bill now moves to the state House, where Democrats hold a significant majority. If successful there it would progress to the desk of Gov. Kate Brown (D) who has voiced support for expanding background checks.