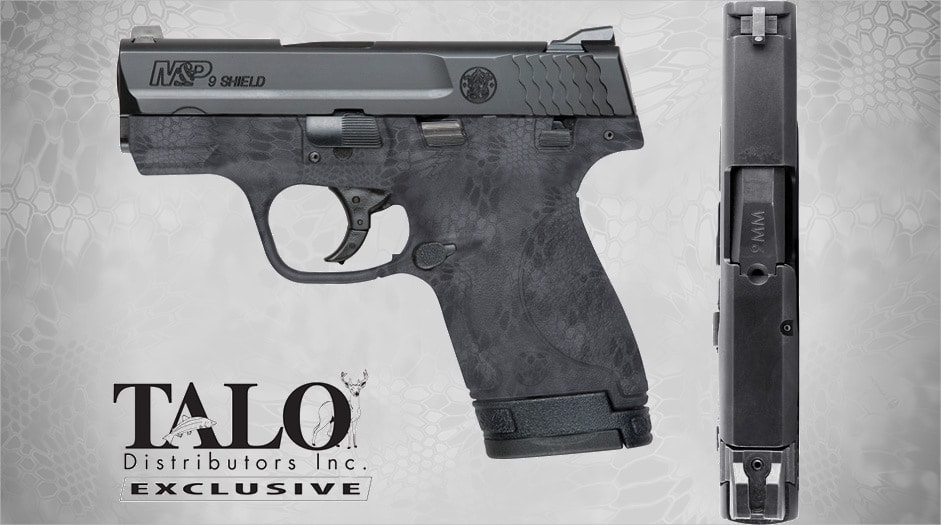 Smith & Wesson has partnered with Talo to put together nine new distributor-exclusive M&P pistols for .22 Long Rifle .38 ACP, 9mm Luger and .40 S&W. These M&Ps range from the pocketable M&P Bodyguard to the standard service-size M&P and everything in-between.

These Talo-exclusive M&Ps prominently feature Kryptek’s hot new Typhon camo pattern, Typhon, which overlays shades of grey and charcoal over black designed for use in dark urban environments. Krypek making a great name for themselves with edgy, modern camo prints and it was only a matter of time before we saw something along the lines of these M&P pistols in order to serve “those who operate when and where others will not venture.”

On these nine new models only the frames sport the Typhon camo. The slides, controls, and where present, interchangeable grip inserts, all remain the standard black finish for a bit of contrast, in the same style as the flashier Carbon Fiber-edition M&P pistols launched at the top of this year.

In addition to the standard and compact double-stack M&P pistols, Smith & Wesson and Talo are offering a single-stack concealed-carry models with Kryptek’s Typhon as well, including the Bodyguard and the Shield. The nine models are the subcompact M&P Bodyguard and Bodyguard Crimson Trace in .380 ACP, compact M&P9C and M&P40C in 9mm and .40 S&W and the standard-size M&P9 and M&P40 in 9mm and .40 S&W. Lastly they’re also giving their new M&P22 Compact the Typhon treatment. It’s an 85 percent scale version of the standard M&P pistol chambered for .22 LR. 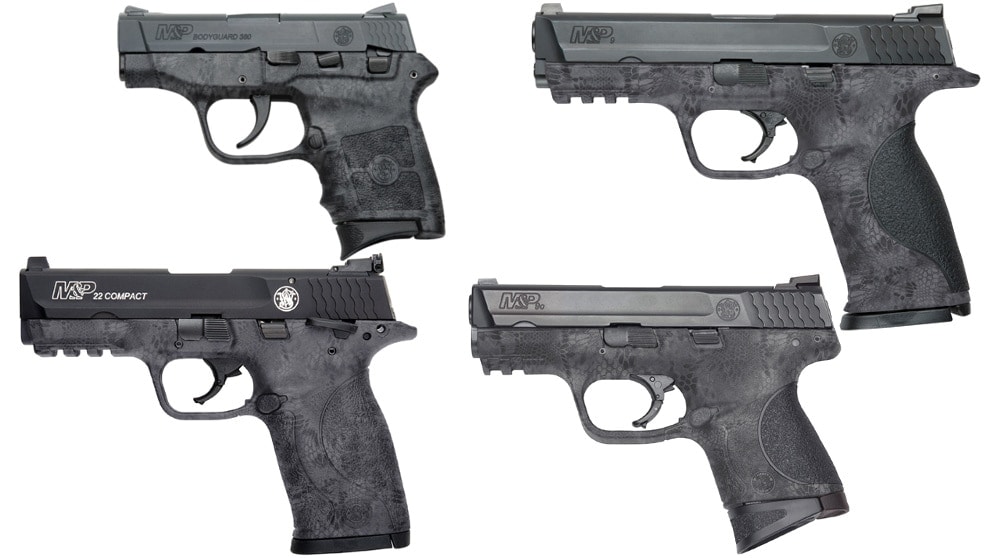 “The positive feedback we received from NRA attendees who stopped by the booth to take a first look at the new Talo exclusive M&P pistols was very encouraging,” said Jan Mladek, Smith & Wesson general manager. “Each model has been specifically engineered to meet the high standards of today’s professional operators and when combined with the new Kryptek Typhon finish, these new pistols offer even greater concealment benefits as well as the ability to have further customization on your personal firearm.”

Fortunately for today’s operators on a budget the new Talo exclusives aren’t going to break the bank. The Kryptek Typhon camo finish only adds $30 to the sticker when compared to standard black M&P pistols, setting MSRPs for these new models between $409 and $599. Real-world prices can be expected to be a bit less, too.