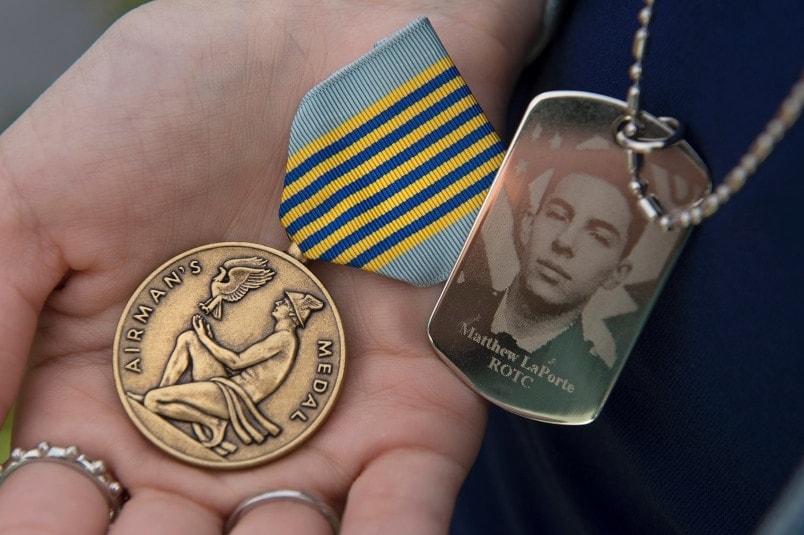 La Porte, a U.S. Air Force Reserve Officer Training Corps member in Virginia Tech’s Corps of Cadets, was a sophomore studying for a degree in political science when a mentally unstable mass killer shot and killed 32 people and wounded 17 others in a series of attacks on campus.

“When the shooter subsequently forced his way into the classroom, Cadet La Porte, with complete disregard for his own safety, unhesitatingly charged the shooter in an aggressive attempt to stop him, drawing heavy fire at close range, and sustaining seven gunshot wounds,” reads La Porte’s citation as obtained by Air Force Times. “Cadet La Porte’s actions helped save lives by slowing down the shooter and by taking fire that would have been directed at his classmates. He sacrificed his own life in an attempt to save others.”

As noted by Stars and Stripes, retired Air Force Lt. Col. Keith Gay, one of La Porte’s aerospace studies instructors, conducted the research into the events leading up to the cadet’s death and pursued the award.

It was issued following interviews with survivors and forensic evidence that indicated La Porte, unarmed, charged the shooter in the moments before his death. La Porte was the last victim the killer took before committing suicide and was shot more times than any other victim.

According to USAF regulations, the Airman’s Medal is awarded to any member of the U.S. armed forces of the United States or of a friendly nation who, while serving in any capacity with the Air Force, have distinguished himself or herself by a heroic act, usually at the voluntary risk of his or her life but not involving actual combat.

La Porte’s decoration was presented to his family on April 9 at Westview Cemetery in Blacksburg, Virginia with the entire Virginal Tech Corps of Cadets in attendance in recognition of his heroic act.