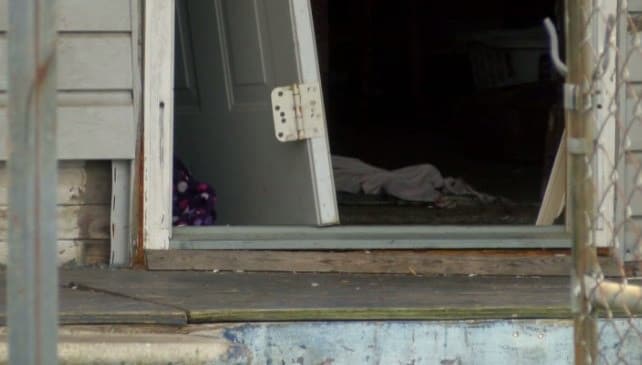 The victim said she was asleep when the three suspects kicked in her door. (Photo: Fox)

The victim, who is only being identified as a 37-year-old female, said she awakened around 3 a.m. when the three suspects kicked in her door, a local Fox affiliate reported. Two of the suspects ransacked her home and went through her belongings, while the third suspect kept the woman in her bedroom and raped her at gunpoint.

The two suspects left her home, but the third suspect remained behind and began beating the woman in the head with the gun while demanding money. The woman, in an apparent attempt to get help, told the suspect that her neighbor kept all of her cash for her.

The woman then led the suspect to her neighbor, who was staying in a camper outside of a nearby body shop. As they approached the camper, she began yelling for the man to help her. He called 911, but when the suspect saw he was doing this, he became infuriated and fired two rounds into the air before pointing the gun at the neighbor. However, what the suspect didn’t know was that the neighbor was also armed.

The neighbor fired a single shot, striking the suspect in the chest. After running a short distance, the suspect collapsed. He was pronounced dead at the scene.

The victim was transported to the hospital where she received treatment for the injuries she sustained during the attack.

Authorities are working to determine the identities of the remaining suspects. They have not yet released the name of the suspect who was shot and only identified him as a 17-year-old male.

However, local media spoke with Andrenetta Jones, who is the sister of the deceased suspect. She said the family wants answers.

Jones said they want the other suspects found, so they can get the whole story.

Other neighborhood residents were shocked to hear about the crime as well. Resident Gene Handy said it was “a blessing” that the neighbor was there when the woman went to him for help. Handy added that he’s glad the woman is alive, yet still sorry that the suspect had to die.

“But when your life’s threatened, I mean, you just have to take matters into your own hands, I guess,” he said.

The investigation is ongoing and no charges have been filed at this time.