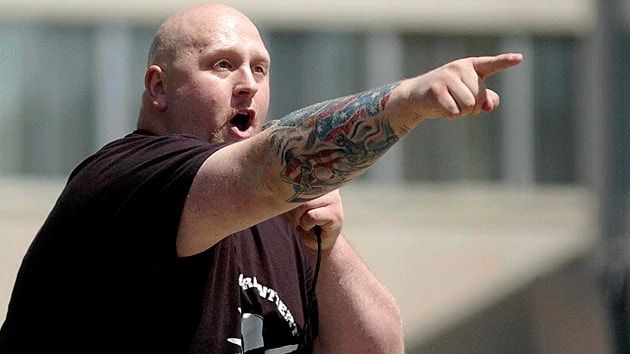 Oral re-arguments will be heard by the U.S. Supreme Court on Monday in the case of a Neo-Nazi sentenced to 15 years in prison under the Armed Career Criminal Act, a repeat-offender statute called into question for being unconstitutionally vague.

Samuel Johnson – a convicted felon and admitted member of a hate group – was arrested in November 2010 after a search of his vehicle revealed he was in possession of a semi-automatic rifle, an offense in and of itself only carries a maximum sentence of 10 years in prison. Johnson pleaded guilty in April 2012, according to the U.S. Attorney’s Office.

Because Johnson had three previous violent offenses on his record, including an arrest for possession of a short-barreled shotgun, a judge ruled he qualified for a longer sentence under the ACCA.

Part of what his defense will argue deals with the question of the ACCA’s vague and unconstitutional definition of a “violent felony” and that mere possession of a sawed-off shotgun should not fall within that definition, according to court record.

Specifically, the disputed portion of the definition of a violent crime “otherwise involves conduct that presents a serious potential risk of physical injury to another” and has become known as the “residual clause,” according to criminal law attorney Rory Little.

The case is the fifth in seven years to address the clause and the Supreme Court has still not come to a consensus on whether it is unconstitutional, Little wrote.

Attorneys on both sides of the case could not be reached for comment Friday.

Guns.com also reached out to Gun Owners of America and gun control group the Brady Center to Prevent Gun Violence for this article and could not reach representatives from either by story publication, however, we did speak with both sides in previous coverage of the trial. Both groups filed amicus briefs in the case.

For the GOA gun rights group, this is a Fourth Amendment issue.

“It gives the police an overly broad tool that they shouldn’t have,” Larry Pratt, GOA executive director, previously told Guns.com. “So, if we win, good – we protect the Bill of Rights.”

Pratt was sure to make clear his organization doesn’t condone the fact that Johnson is a white supremacist, only that he was improperly searched by authorities and that merely possessing a rifle should not have triggered the ACCA’s strict mandatory minimum sentencing.

But the GOA – often considered a more extreme equivalent of the National Rifle Association, though the groups are at odds – is not the only group backing Johnson’s case. The National Association of Criminal Defense Lawyers and the Cato Institute also took up Johnson’s case and filed amici in support.

“Numerous circuit splits persist, leaving the courts, litigants, and the public unable to surmise which predicate offenses are included within the residual clause or why,” read the groups’ amicus brief.

“There’s nothing innocuous about this dangerous felon subverting a host of several gun laws to obtain and illegally possess a gun,” Lowy previously told Guns.com. “It’s a gross understatement to refer to that as quote ‘mere possession.’ It’s rather surprising that there are some who don’t feel that someone like this should be severely punished.”

In 2010, the Federal Bureau of Investigation learned of Johnson’s ties to the Neo-Nazi movement. Authorities launched a more than year-long investigation into Johnson’s involvement with several hate groups, including one he formed called the Aryan Liberation Movement. The FBI said Johnson told a federal informant about several terrorist attacks he would plan on various targets, including the Mexican Consulate in St. Paul, Minnesota, using homemade explosive and a cache of weapons he kept. Johnson also reportedly said he counterfeited U.S. currency to support his group’s actions.