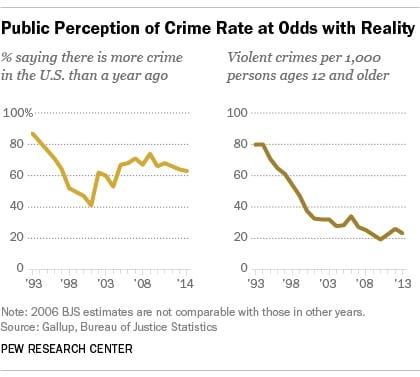 Pew Research Center released a study in December that finds for the first time that more Americans say protecting gun rights is more important than controlling gun ownership. In turn, the research group said Friday an analysis shows the shift is based on the public’s perception that crime is on the rise when it really isn’t.

“Over the past 25 years or so, there has been a divergence between American perceptions about crime and actual crime rates. And those who worried about crime had favored stricter gun control; now, they tend to desire keeping the laws as they are or loosening gun control,” writes Andrew Kohut, Pew’s founding director. “In short, we are at a moment when most Americans believe crime rates are rising and when most believe gun ownership – not gun control – makes people safer.”

The crime rate in the U.S. started a sharp decline from its peak in the early and mid 1990s, falling from 87 percent in 1993 to 41 percent by 2001, and has steadied around that figure since. However, 63 percent of Americans said in a Gallup survey last year that they think crime was on the rise.

The analysis reasons the erroneous assumption are unclear, though many blame it on the non-stop coverage of horrific events like mass shootings, and political rhetoric like gloom and doom marketing by advocacy groups. 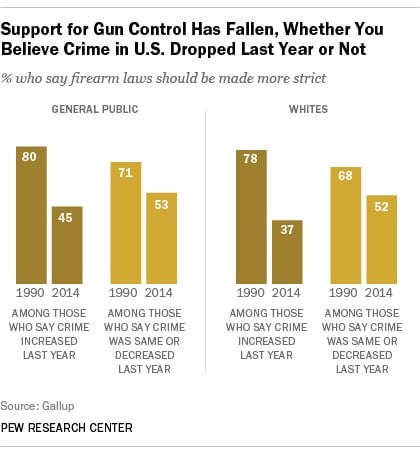 “Today, those who say that crime is rising are the most opposed to gun control: Just 45 percent want to see gun laws made more strict, compared with 53 percent of those who see crime rates as unchanged or dropping,” Kohut writes, adding, “That’s not the way people thought 25 years ago.”

Support for stricter gun control was far higher overall in 1990, but it was also somewhat higher among those who felt crime was on the rise.