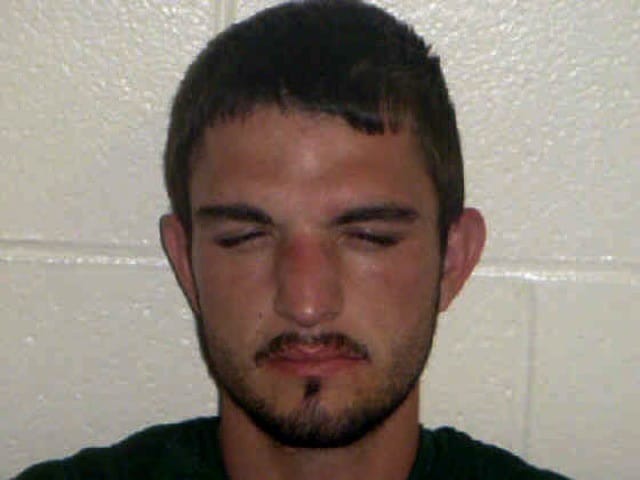 Michael Wilcox admitted to killing both Fowler and Gilkison, and blamed “drug use, intoxication, and hearing voices or music.” (Photo: WLWT)

The search for a Kentucky man suspected of killing his fiance and best friend Thursday came to a dramatic end Friday following a brief standoff with a rookie officer, whose body cam footage captured the potentially fatal and tense moments.

Authorities believe Michael Wilcox, 27, fatally shot Courtney Fowler, 25, and was said to be a person of interest in the death of Zach Gilkison, 27. Fowler was found by Wilcox’s mother at his Brown County home Thursday afternoon, and Gilkison’s body was discovered at his own home the following morning, local media reported.

Wilcox was not home at the time his mother showed up and his vehicle was gone as well, but shortly after Fowler’s body was discovered, Buddy Coburn, an investigator for the county prosecutor, along with his wife, who is also a police officer, saw Wilcox at a nearby restaurant.

Coburn and his wife approached Wilcox, who allegedly admitted that he “did it” and also claimed he had a gun. Wilcox was reported to have been reaching underneath his seat as he drove away. Coburn and his wife attempted to grab onto Wilcox, but were briefly dragged by the fleeing vehicle before letting go.

Neither were seriously injured during the confrontation, and Coburn returned to his vehicle and followed Wilcox.

Wilcox led authorities on a short pursuit before he stopped his car and was confronted by New Richmond Police Officer Jesse Kidder.

As Wilcox exited his vehicle, he charged at Kidder, who continually ordered the man to back down and put his hands up. Wilcox ignored Kidder’s commands and continued to come towards the officer before placing one of his hands into his pocket. At that time, authorities believed that Wilcox was likely armed.

But Officer Kidder, who had his service pistol trained on Wilcox the entire time, explained in an interview that he wanted to be absolutely sure before he used deadly force against Wilcox.

“I was trying to open a dialogue with him, ‘I don’t want to shoot you, get on the ground,’ but he wasn’t having it. He kept repeating, ‘Shoot me.’ At one point, he said, ‘Shoot me or I’ll shoot you,’” Kidder said.

Kidder continued to take steps back as Wilcox got closer, but at one point Kidder fell.

“He got towards my face right as I lost balance,” Kidder said. “I’m thinking, at this point, that if he goes into attack me, that I’ll have to use deadly force to defend myself.”

But it never came to that. Kidder continued to talk with Wilcox until he eventually surrendered and lied down on the ground with his hands spread, as another responding officer came in to handcuffed him.

“For him to make the judgment call that he did shows great restraint and maturity,” Harvey said. “This video footage, it eliminated all doubt that this officer would have been justified if, in fact, it came to a shooting.”

The confrontation was captured on body cam footage, but it wasn’t a department-issued camera. Kidder said a family member gave him the body camera following the events in Ferguson, Missouri, but Kidder is now trying to find the funds to provide body cams for all of the officers in his department.