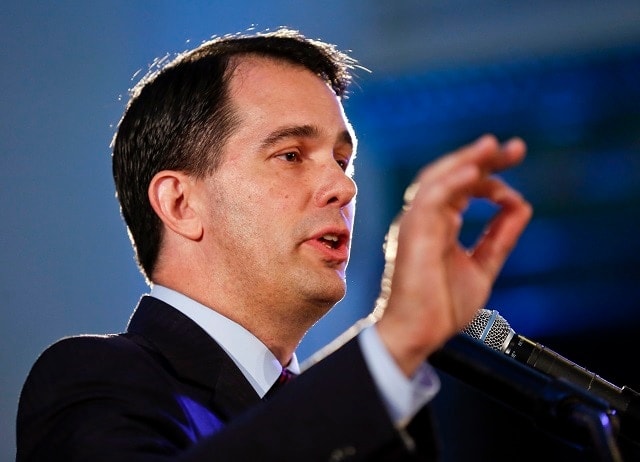 Wisconsin Gov. Scott Walker is not a fan of the state’s mandatory waiting period for handguns. (Photo: AP via Washington Times)

A nearly 40-year-old law mandating a waiting period for all handgun purchases in Wisconsin could soon find itself extinct under a proposal advancing in the state legislature with Gov. Scott Walker’s support.

The measure, introduced in the state Senate in February, has passed committee and is set for consideration by the full body Tuesday.

Republican lawmakers, who control both chambers of the legislature, contend the 1976 law is outdated today due to advances in instant background check practices that weren’t even on the horizon when it was implemented.

“The need for having a 48 hour waiting period has simply vanished over the decades,” said Rep. David Steffen, R-Green Bay, a co-sponsor of the proposal.

Steffen’s measure, SB 35, eliminates the arbitrary waiting period for handguns in the state and replaces it with language that would allow a transfer as soon as the firearms dealer gets the background check approval from the state Department of Justice. Current law requires that those seeking to buy a pistol or revolver must wait no less than 48 hours even if the background check has been processed. In some instances, current law also allows for a three-day extension of the period as well.

The bill is receiving some opposition from lawmakers across the aisle who cite public safety concerns in justifying their stance.

“I’ve heard from advocates for victims of domestic abuse who have said if this waiting period is repealed it’s more likely that women and children could be victims of violent crimes involving handguns,” said Rep. Eric Genrich, D-Green Bay. “When they step out and say this policy is going to be harmful to the people that we care about and support – that certainly gets my attention.”

The gun-control friendly Violence Policy Center contends that arbitrary gun waiting periods reduce the number of prohibited people who are able to purchase firearms in addition to helping deter suicides and other impulsive acts. The group maintains that in addition to Wisconsin, states that currently have laws requiring some sort of waiting periods include Florida, Hawaii, Illinois, Iowa, Maryland, Minnesota, New Jersey, Rhode Island and California.

However, gun rights advocates have won important court victories in recent years against such practices. In California, last summer a federal judge struck down the state’s longstanding 10-day waiting period for some gun purchases, citing it as unconstitutional.

“There is no evidence that a ‘cooling off period,’ such as that provided by the 10-day waiting period, prevents impulsive acts of violence by individuals who already possess a firearm,” wrote Senior U.S. District Judge Anthony Ishii – a 1997 appointment by President Clinton – in his 56-page ruling in the case of Silvester v. Harris.

Should the Wisconsin bill prove successful in the state legislature it will proceed to the desk of the Republican governor. A likely 2016 presidential candidate who spoke at the National Rifle Association’s Annual Meeting this month, Walker has repeatedly voiced his approval of ending the waiting period.