Woman shoots husband in self-defense, is shot by officers (VIDEO) 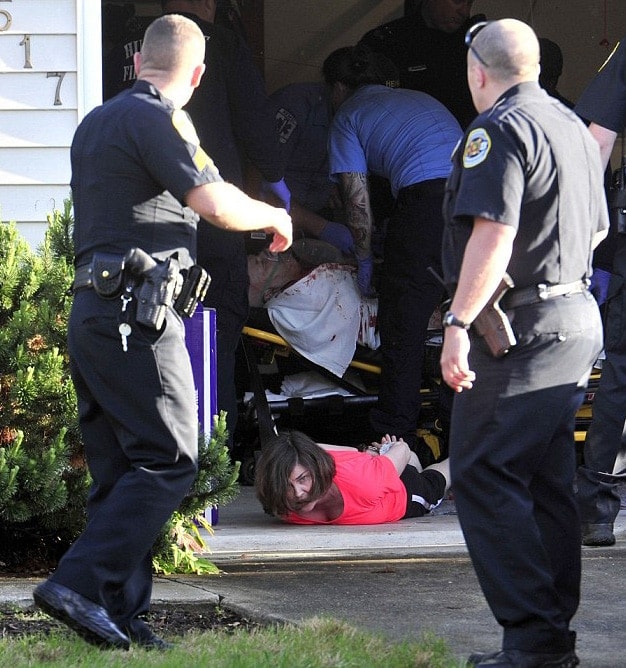 At some point, Lisa was handcuffed and lying face down on the ground after police arrived. (Photo: AL.com)

When a man with a history of domestic violence showed up at his estranged wife’s home in Huntsville, Alabama, Sunday evening armed with a gun, she grabbed her own firearm to protect herself, but was subsequently shot by responding officers who arrived at the home to find her holding the weapon.

Lisa Skinner, 52, had been staying at her mother’s home and had an active order of protection against Bradley Skinner, 59, which she said filed because she feared she would become the victim of a murder/suicide. But the protective order did not keep her estranged husband away, who was armed with a pistol and a large knife when he broke out the glass to the back door to gain entry into the home around 6 p.m., AL.com reported.

Lisa told her mother to leave the house and go to the neighbor’s to call 911, then she armed herself with a shotgun and went into the garage. At some point Bradley fired a shot and as he continued to make his way towards Lisa and pointed the pistol at her, she shot him in the chest.

Responding officers were already on their way and heard the gunshots coming from the house. When they arrived at the scene, Lisa was still standing in the garage. They ordered her to drop the weapon, but she instead turned toward the officers with the shotgun pointed in their direction, according to a report by local media.

Lisa’s actions prompted an officer to open fire, striking her once in the hip.

Both Lisa and Bradley were transported to the hospital. Lisa is expected to recover from her injuries, while Bradley’s injuries were determined to be life-threatening. He underwent surgery, but is still listed in critical condition.

The officer who fired the shots was placed on administrative leave, as is standard protocol.

No charges have been filed against either party at this time.