GOP lawmakers cause stir with AR-15 on Capitol Hill 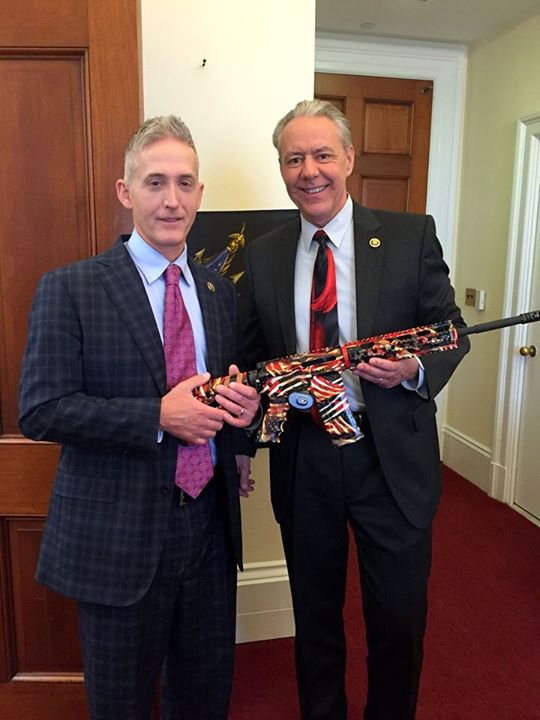 A pair of Republican congressmen caught flak after an image with the two holding a controversial rifle, banned in Washington D.C., hit social media.

The two, Reps. Ken Buck (R-Colo.) and Trey Gowdy (R-S.C.), even found themselves briefly under the eye of the District of Columbia’s Attorney General’s Office after the Colorado lawmaker posted the image last Friday.

“My friend Trey Gowdy stopped by the office — had to show him my AR-15 ‪#‎2A‬,” Buck posted to his Facebook page on April 17. ‬

As shown in the photo, the modern sporting rifle complete with a patriotic coating is lacking its bolt carrier group and has its trigger well enclosed with a lock, rendering it non-functional.

The post was soon crowded with comments that tilted by far more to support and appreciation than offense. One commenter, however, satirically noted, “I’m surprised you’re not breaking some D.C. law by having it.”

In fact, AR-15s are illegal under the District’s draconian gun control laws and have been for years despite a number of federal suits and attempts to change that prohibition.

This led to a report by The Hill Monday that the Metropolitan Police Department and city’s attorney were looking into whether the congressional representatives broke the city’s law.

In the end, according to the Capitol Police who are in charge of security at the congressional offices in which the image was taken, Buck broke no laws.

Lt. Kimberly Schneider, a spokeswoman for the U.S. Capitol Police, explained to the Washington Post that members of Congress, “may maintain firearms within the confines of their office,” such as Buck does and further that they and their employees can transport weapons within the Capitol grounds as long as they are, “unloaded and securely wrapped.”

“Anti-Gun Liberals are leading a full-blown attack against Congressman Trey Gowdy and me over this picture. Some have even gone far enough to report me to the police even though I had the gun checked out and approved by the U.S. Capitol Police,” he posted to his social media account Tuesday night.

“The Second Amendment exists to protect your God-given right to bear arms. The actions by Anti-Gun Liberals against Trey Gowdy and me are just another attempt to strip us of our rights,” Buck said.

There is no comment on whether Congressman Gowdy’s suit is regulated under the District’s laws.