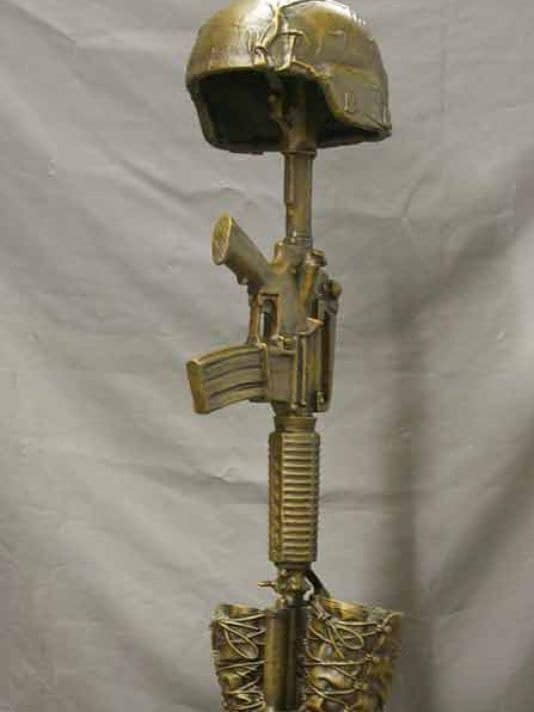 A model of the proposed design of memorial, complete with M-16. (Photo: Detroit Free Press)

Following a month of controversy over a proposed design for a war memorial in one Michigan park, the Milford City Council approved the design after backlash from local veterans and civilians alike.

The proposed design is an 8-foot bronze memorial with a granite base, erecting what’s known as a battlefield cross, featuring a pair of combat boots, an M-16, dog tags and a helmet. The memorial would be placed near the entrance of Milford’s Central Park at the end of a brick walkway coming from the park’s current veterans memorial.

“There was some concern from a couple of members regarding the specific memorial that’s proposed. Specifically, the gun,” Village Manager Christian Wuerth, who did not recommend the design to the council, told the Detroit Free Press earlier this month.

Wuerth explained that while those members understood the meaning behind the memorial, they didn’t feel like it was an appropriate location for such a sculpture.

But Councilwoman Jennifer Frankford pointed out, “If it wasn’t for the boots and the gun and the helmet, we wouldn’t have all the freedoms we have.”

Bear Hall, chairman of the local group Friends of Veterans, said those he spoke with were furious about the backlash the design received.

He added that they’re not even opposed to having the monument in a different location, “but we don’t want some foofoo fountain, either.”

And apparently there were a few others who shared the same sentiment. In fact, according to a report by a local ABC affiliate, the number of those supporting the construction of the memorial far outweighed the number of members in the entire city council at a Monday night meeting. The council even requested those present keep their comments at under two minutes, in order to give everyone a chance to speak. And of those who spoke up, not a single person opposed the monument’s design. In addition, support was shown with intermittent applause and cheers as comments were made in favor of the memorial.

“To deny the statue is to deny the truth about war, to deny our history and to deny our children the opportunity to ask meaningful questions as it relates to both,” Hall said.

But support came in another form as well. Through the Friends of Veterans, Hall has helped to raise $12,000 to build the monument, whose design was approved by the council just minutes before the meeting came to an end.

Hall will now meet with Wuerth to discuss moving forward with the design.