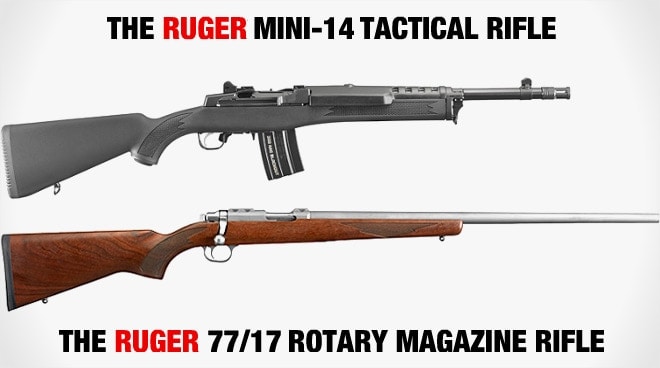 Ruger has responded to consumer demand with these new rifles chambered for 300 AAC Blackout and .17 WSM. (Photo: Ruger)

Sturm, Ruger & Company will make a lot of people happy — customers have been asking for both for quite some time — by introducing two new rifles in two new calibers: a semi-auto Mini-14 chambered for 300 AAC Blackout and a bolt-action Ruger 77 chambered for .17 Winchester Super Magnum.

The Mini-14 is Ruger’s semi-automatic rifle based on the time-tested M1/M14 design. Over the years it’s seen a handful of prominent calibers but this 300 BLK is a first. The .30-caliber cartridge continues to win people over as a flexible round for hunting, self-defense and sport.

By a similar token, .17 WSM is a new multi-purpose round that shoots more accurately than your average rimfire cartridge with a little more range and a lot more power, too. It’s a solid varminting cartridge and a natural fit for Ruger’s 77 action. 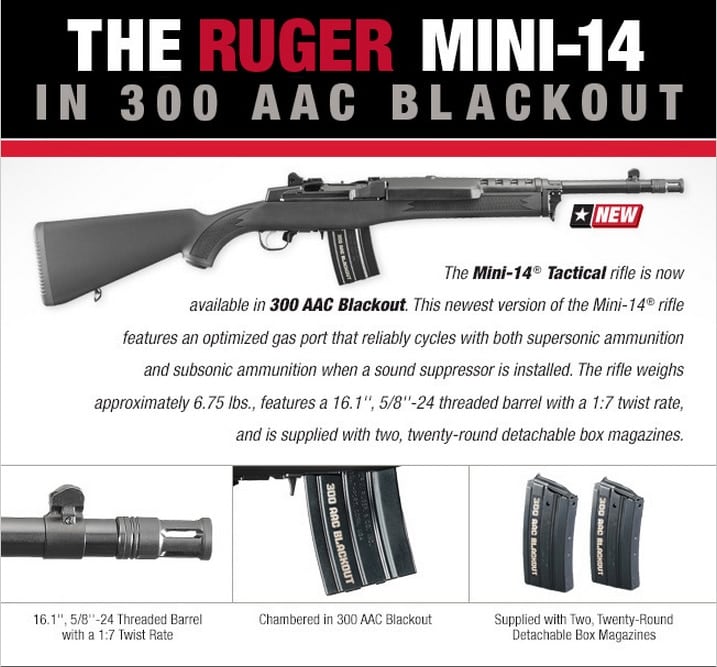 The 300 BLK model has all the features consumers expect from Mini-14 Tactical rifles. (Photo: Ruger)

Ruger’s Mini series is well-established with shooters who like the action and the style. With its traditional stock and clean piston-driven operation, the Mini is a semi-automatic alternative to the AR-15 and other more aggressively-styled sporting rifles. Because of its “featureless” configuration, it’s legal in more states than other rifles, too.

That being said it’s still a Mini-14 Tactical with a modern synthetic stock with a 13-inch length of pull and a carbine-length 16-inch threaded barrel. It’s fairly light at less than 7 pounds unloaded and ships with two 20-round magazines where available. They’re different than standard Mini-14 mags in that they’re prominently marked “300 AAC Blackout” on the sides to prevent ammo mix-ups.

The barrel is fit with a compact bird cage flash hider and is threaded 5/8-24 for use with popular .30-caliber muzzle devices including suppressors and suppressor mounts, and the gas system is tuned to run both supersonic and sub-sonic ammo.

If you’ve been asking for Ruger to put a Mini-14 on the market chambered for .300 BLK the waiting’s over. With a suggested retail price of $1,019 the 300 BLK Mini-14 doesn’t cost any more than the other Tactical models which commonly list in stores in the $700 to $800 range.

The new 77/17 .17 WSM rifle shoots the relatively new cartridge, introduced in 2013. An all-new high-velocity rimfire round, .17 WSM  uses modified .27-caliber nail gun charges to push .17-caliber projectiles at speeds up to 3,000 feet-per-second, generating up to 300 foot-pounds of force at the muzzle.

Like several other 77/17 rifles the new .17 WSM model sports an American walnut stock and matches it with a matte stainless barrel and action. It has a 24-inch barrel to take full advantage of the cartridge and feeds from new six-round rotary magazines. The rifle has integral scope mounts and is designed to be shot with an optic. The rifle doesn’t have iron sights and requires a scope.