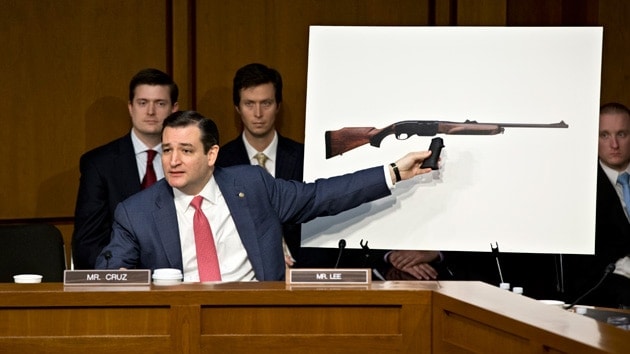 After much anticipation, Senator Ted Cruz formally announced last month that he was running for President. This means that the mainstream media has been working overtime to vet the freshman senator’s record. One thing that won’t take much digging is his history on gun policy.

The primaries still seem like a lifetime away, and the number of other pro-gun hopefuls in the pool is only increasing. But since Cruz has received the most limelight for his stance on gun rights, I think it’s appropriate to dive deeper into his Second Amendment creds.

Few politicians have been so bold and courageous as Senator Cruz on this important issue. From the very start of his congressional career, Cruz has made a point of defending the Constitution and Bill of Rights. More than any other politician currently on Capitol Hill, Cruz stuck to his guns on the Second Amendment even when it didn’t seem politically wise to do so.

During his first few months as Senator, Ted Cruz actively opposed President Obama’s gun-grabbing efforts after the Sandy Hook tragedy, and even called him out on “exploiting” these murders to promote his gun control agenda.

Cruz, along with Sens. Mike Lee and Rand Paul, threatened filibuster against Sen. Harry Reid’s gun control bill a few months later. The senators explicitly noted that they would “oppose the motion to proceed to any legislation that will serve as a vehicle for any additional gun restrictions.”

Later that year, on the heels of the Trayvon Martin trial — a time when self-defense advocates were regularly bullied by the left — Cruz compassionately responded to the Senate testimony of Trayvon Martin’s mother, Sybrina Fulton, that the “Stand Your Ground” law is flawed and must be changed. While expressing his deepest condolences, Cruz reaffirmed that this law was not used in her son’s case, and that self-defense laws are not racially motivated.

Cruz has been just as vocal about his beliefs as any presidential candidate. Shortly after entering the race, he told an audience that gun ownership serves “as the ultimate check against governmental tyranny.” The mainstream media has painted this as extreme, yet it is such an important argument for the Second Amendment.

As the age-old comparison goes, Adolf Hitler disarmed the Jews before he mass executed them. An article by National Review points out that “Hitler seized power and used the records to identify, disarm, and attack political opponents and Jews. Constitutional rights were suspended, and mass searches for and seizures of guns and dissident publications ensued. Police revoked gun licenses of Social Democrats and others who were not ‘politically reliable.’” History has proven that it only takes a few years for government to become out of control.

It seems odd that some have criticized Cruz for being a “hypocrite” on Second Amendment rights. Back in 2013, when Cruz was going toe-to-toe with Senator Dianne Feinstein on an assault weapons ban, Forbes mocked the senator for citing his credentials on the District of Columbia v. Heller case.

As the writer notes: “[I]n the [amicus] brief Cruz submitted to the Supreme Court, he argues that the Court could strike down the Washington DC gun ban without impacting (declaring unconstitutional) the many state regulations prohibiting or limiting ownership of certain weapons. However, included among the state regulations Cruz lists in his brief as worthy of meeting constitutional scrutiny were the gun regulations then in effect—and currently in effect—in the States of Connecticut, Massachusetts and New York which prohibit ownership of the very assault weapons that would be banned by the Feinstein legislation.”

Cruz may have gotten himself into a pickle with this one, but it doesn’t mean he isn’t a champion of gun rights. After all, the Supreme Court ended up ruling in favor of the Second Amendment, and the decision became a victory for gun rights. In fact, NRA recognized his work on this case when they endorsed him for Senate.

As a national figure, Senator Cruz has been proactively fighting for gun rights for the past four years, and despite being blasted by the media and by his own Republican colleagues for his efforts, his popularity has only grown. As he told Jay Leno, “what I’m trying to do is my job, and occasionally people don’t like that.” Indeed, the word “occasionally” may be the understatement of the century.

Although they will mock him and paint him as an extremist, the mainstream media will only reaffirm that his gun policy is bulletproof. Regardless of who else enters the race, gun rights activists can rest assured that someone will carry their banner and make the argument for them.