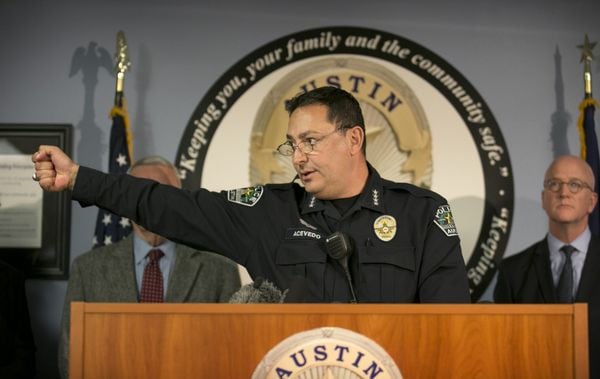 Austin Police Chief Art Acevedo isn’t a big fan of the idea of open carry in Texas. (Photo: The Statesman)

Austin Police Chief Art Acevedo, who has spoken out against open carry several times, took to social media Tuesday to vent his feelings on an amendment to HB 910, a bill that will likely bring the practice to the Lone Star State in coming months. The amendment would prohibit law enforcement from stopping a law-abiding citizen who is openly carrying and hasn’t broken the law.

“Yesterday’s amendment to Texas’ Open Carry Legislation is beyond belief and Aiken (sic) to open season for gang members, drug cartels, outlaw motor cycle gangs and any other criminal or extremist to defy the law with impunity, just brilliant!,” Acevedo said. “If criminals, drug cartels, and extremists had a seat at the policy writing table they couldn’t have come up with s (sic) better Amendment.”

Austin, currently ranked among the safest major cities in the country, could soon see that change in Acevedo’s view as he feels the amendment would allow otherwise prohibited firearms possessors to carry guns without worrying about police interaction.

His remarks were supported by comments made by James McLaughlin, general counsel for the Texas Police Chief’s Association.

“The concern is, when we see somebody with a weapon, how do we tell if they are legally carrying,”McLaughlin said. “If you see a police office that is carrying what we called ‘uncovered,’ you’re going to see a badge. In this instance, it’s going to be difficult to determine who is legally carrying and who is not.”

“Chief Art Acevedo’s despicable whining about losing his ability to violate the rights of law abiding gun owners is not in keeping with Texas values and constitution principles,” Open Carry Texas President CJ Grisham told Guns.com Thursday. “Chief Acevedo has proven time and again that he has nothing but hate and vitriol for gun owners.”

In 2013, the chief openly mocked gun owners on Twitter then backpedalled and apologized after deleting the remarks.

Last December Acevedo called on citizens to report “gun enthusiasts” and those “armed with these types of firearms,” referring to modern sporting rifles like AR15s and AK47s.

“Now, he wants the ability to detain law abiding citizens who are peacefully exercising their right to self-defense abiding bearing arms and calling them extremists,” Grisham said. “It’s time to stop importing anti-gun police chiefs from authoritarian states like New York and California so we can preserve our independent and liberty loving spirit. Acevedo is a threat to that and should lose his peace officers license in Texas.”

Grisham advised his group is planing an open carry rally in Austin to protest Acevedo’s statements.

Texas HB 910 is currently in the Senate for a procedural vote to approve the amendments made by the House and then to Gov. Abbott who has repeatedly advised that he would sign open carry legislation that makes it to his desk.