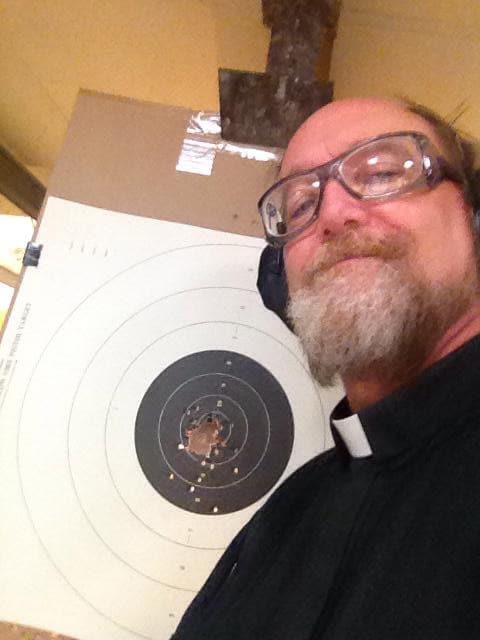 Father Edward Fride said one woman told him she was afraid of guns. His response? “Well, how do you feel about rape?” (Photo: Facebook)

An Ann Arbor priest who encouraged his parishioners to attend concealed pistol license classes at his church has had his mind swayed by the Lansing Bishop, who said the church is not the place for such classes, the Detroit Free Press reported Tuesday.

Father Edward Fride made headlines when he handed out a lengthy letter, titled “We’re not in Mayberry anymore, Toto,” in which he stated that it’s common for Christians to solely rely on their faith and believe that nothing bad will happen to them. Fride expressed concerns over increasing crime and a decreasing police force, and even echoed the words of Detroit Police Chief James Craig: “Good Americans with CPLs translates into crime reduction.”

Fride pointed out that while Craig’s advice and an increase in the residents of Detroit fighting back against crime has indeed been a good thing for the city, it has unfortunately been bad on the surrounding suburbs, such as Ann Arbor, as some criminals have been somewhat forced out of Detroit. Fride also noted that other area law enforcement officials have given similar advice to Craig’s.

In the letter, Fride discussed prudence and a variation of the “Mayberry syndrome” in which believers may think, “I’m not worried, I’m a Christian, God will protect me.” Fride pointed out the fault in such thinking, reasoning that if such were true, it would require the church to believe that none of the victims killed at Columbine, Sandy Hook, Virginia Tech or Aurora were Christians, which he said was obviously not the case.

“There was in the past a certain kind of ‘magical’ thinking in some communities that because we were so special, so faithful, so charismatic, so whatever, that nothing bad could ever happen to us, to our marriages, to our kids, etc.,” Fride continued in the letter. “History has demonstrated the radical insufficiency of that perspective.”

While Fride concluded that divine intervention could certainly protect one from harm, he encouraged knowledge as a means of protecting oneself, knowledge which he saw in the form of offering CPL classes at the church.

The response to the classes was mostly positive. In fact, several classes had already taken place before the letter was sent out, and all of those sessions, as well as the ones which were scheduled, had been filled. However, the priest also received quite a bit of backlash for using the church to conduct the classes and his religious platform as a means to encourage them.

On Monday, Lansing Bishop Earl Boyea, who oversees the parish, said no more, and Fride complied with his request.

“As our Bishop, he is responsible for setting policy for our parishes and he has decided and publicly stated that CPL classes are not appropriate on Church property,” Fride wrote in a Facebook post the following day. “That is his call to make and we will obviously follow his policy on this and on all decisions he makes as he shepherds this Diocese. No parish is an island unto itself and no priest operates on his own. I am his priest and I will continue to serve him to the best of my ability.”

The responses to Fride’s decision were all positive, with many thanking him for his service to the community. One woman even said, “So sorry your good works became twisted,” but added that she was glad she was able to take one of the classes which was offered because “a woman alone needs protection.”