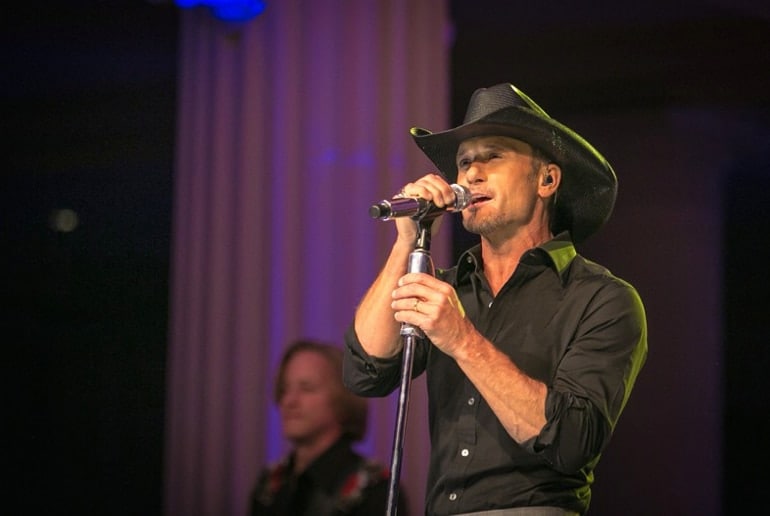 An upcoming concert by country music superstar Tim McGraw for a Connecticut-based gun violence group has seen a defection from among his opening acts and led some Newtown survivor families to assert they have no ties to the event.

The benefit, announced earlier this month as a stop made between the performer’s Shotgun Rider Tour, is on behalf of Sandy Hook Promise.

Formed in the aftermath of the 2012 Newtown school shootings that claimed the lives of 20 first-graders and 6 educators, the group has for the past several years pleaded their case for an overhaul of both local and federal gun laws, and backed legislation for enhanced background checks and magazine limits.

Now, the families of 11 of those killed in that tragic event have come out to clarify that, while some victim’s relatives are tied to the Sandy Hook Promise group, they are not benefiting from the concert.

“Our decision to publicly address this matter is not related to a position regarding any of the complex issues surrounding our tragedy,” the families said in a statement obtained by the Associated Press. “We wish only to provide clarification for the many generous donors that believe they are directly supporting the families at the center of this tragedy by contributing to the Sandy Hook Promise organization.”

McGraw, who received backlash on social media from both gun owners and Second Amendment friendly recording artists such as Travis Tritt, has also seen one of his opening acts, Billy Currington, separate himself from the event.

“I’ve never been one to take on controversial issues – I’m a singer,” Currington posted to social media last week to a divided response from commenters. “I am choosing to step aside from this fundraiser and will focus instead on the rest of the tour dates as I look forward to being on the road with Tim and Chase and having a blast with all of the fans.”

The headliner, who has also been a part of shooting sports-centered events to benefit veterans groups, has sought to explain his views on the upcoming concert.

“Let me be clear regarding the concert for Sandy Hook given much of the erroneous reporting thus far. As a gun owner, I support gun ownership,” McGraw said in a statement to the Washington Post. “I also believe that with gun ownership comes the responsibility of education and safety — most certainly when it relates to what we value most, our children. I can’t imagine anyone who disagrees with that.”

Some in the music industry agree with McGraw and back his decision to keep the event on track. The recording group Little Big Town told Rolling Stone of their support for McGraw as well as their advocacy for more LGBT-friendly songs in country music.

“We love you, Tim. You do the right thing, and that’s what you’re doing because it’s about a child and about a family. I just wish people would put the agenda and the hate down,” Little Big Town’s Karen Fairchild told the music magazine.

The concert is set for July 17 in Hartford, Connecticut.