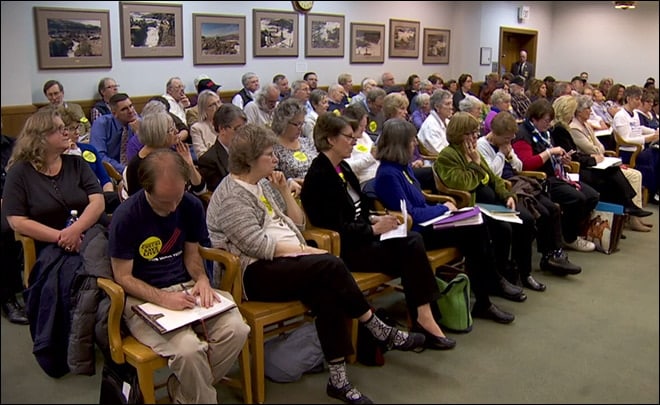 The crowd of speakers to address the Oregon House on a controversial background check proposal Wednesday was deep and varied. (Photo: Sheila V Kumar/AP)

A House committee listened to a marathon of speakers for and against a controversial proposal to expand background checks to nearly all gun transfers Wednesday.

Testimony on the measure, which enjoys widespread Democratic support but is staunchly opposed by GOP members and has already seen threats of recall elections, was heard by the House Rules Committee late into the night. It had passed the state Senate on a partisan 17-13 vote with one chamber Democrat jumping ship and casting her vote with the opposition Republicans last week.

“No matter what the public is told about how many criminals are prevented from getting guns because of background checks, the most cursory examination of Oregon State Police data proves beyond any doubt that this is simply not true,” Kevin Starrett, executive director of the Oregon Firearms Federation, told lawmakers are reported by the Associated Press.

The proposal, SB 941, in its current version would require that all private gun sales take place through licensed firearms dealers who would perform background checks. There are some exceptions for family transfers, law enforcement, and – in some cases – inherited firearms.

Besides state Republicans, a growing number of county sheriffs and Second Amendment advocates vehemently oppose the measure, while gun control groups and gun violence survivors are rallying to back its passage.

“I am here because I am determined to prevent any other family from feeling the enormous pain I felt on Tuesday, Dec. 11, 2012, when my mom, Cindy, was shot and killed doing some last minute Christmas shopping at the Clackamas Town Center,” Jenna Yuille, testified. “Over time I want to pick up the phone and give her a call, I can’t. My mom won’t be there when I get married; she won’t be there when I have my first child… her life was cut short by a senseless and preventable act of gun violence.”

However, in the incident described by Yuille , the Clackamas Mall Shooting that left three to include gunman Jacob Tyler Roberts, dead, the perpetrator stole his firearm and the mall was a posted gun free zone, meaning that the proposed new law would likely not have prevented the tragedy. Further, it is widely believed that Roberts was halted from taking more lives through the actions of a lawful concealed carry holder who interceded.

The committee did not take any action on SB 941 Wednesday. Should it pass there the measure would proceed to the House floor, where Democrats hold a significant majority. If successful, it would progress to the desk of Gov. Kate Brown (D) who has voiced support for expanding background checks.

The House Committee on Rules voted 5-4 Thursday to advance SB 941 to a floor vote in a strict, party-line roll vote.