Catholic Bishop believes only "some" people have right to self-defense 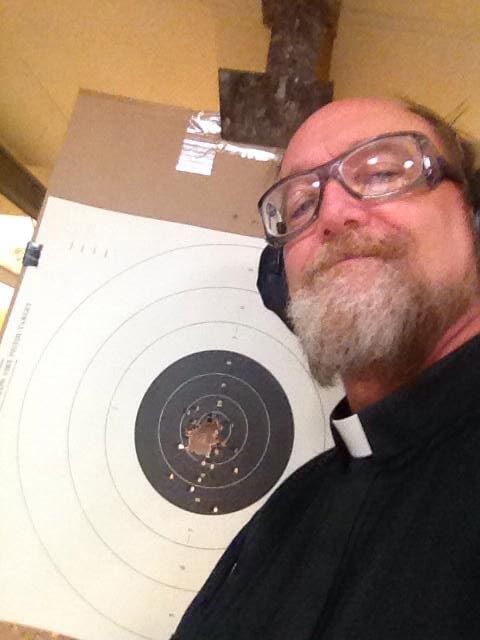 A priest at Christ the King parish in Ann Arbor, Michigan has urged his parishioners to not only pack heat during mass, but to arm themselves with concealed firearms at all times. The priest even offers a concealed carry class at the church.

Father Edward Fride announced that the church would be offering the CPL (concealed permit license) class while delivering his Palm Sunday homily. After some parishioners questioned Father Fride, he sent a letter to his congregates explaining why he is suggesting they carry guns.  He maintains that a recent spike in crimes in the area has prompted him to speak out about those needing to protect themselves. He also stated that armed police assistance is waning due to budget cuts.

His letter was titled “We’re not in Mayberry Anymore, Toto”. Fried wrote “It is very common for Christians to simply assume that they live in Mayberry, trusting that because they know the Lord Jesus, everything will always be fine and nothing bad can happen to them and their families.”

However, Lansing Catholic Bishop Earl Boyea does not agree with Father Fride’s opinions on firearms.

Bishop Boyea stated that guns do not belong in a Catholic Church, and the CPL classes offered at Christ the King Catholic Church are inappropriate. He also claims that the church has already taken a stance on guns and all Catholic churches are effectively “gun free zones”. As the overseer of Catholic churches in the area, the Bishop would have the authority to demand Fride cease offering the classes.

Another part of Fride’s letter stated, “How to balance faith, reality, prudence, and trust is one of those critical questions that we struggle with all our lives. Pretending we are in Mayberry, while we are clearly not, can have very negative consequences for ourselves and those we love, especially those we have a responsibility to protect.”

Of course, I’m in agreement with Father Fride. A gun is an important self defense tool and if you cannot handle what he has to say as the leader of his parish, it might be time to look for a new church. But my opinions do not matter and neither do Fride’s when a Bishop disagrees.

Bishop Boyea appears to be taking the easy way out by saying little. In my opinion, Boyea is essentially asking parishioners to be sitting ducks should a horrifying event take place at the church.  “We are followers of Jesus Christ, who raised not a hand against those who mocked, tortured, and finally murdered him,” Boyea said in 2012. ” While we grasp both the Second Amendment and the legitimate right of some persons to defend themselves, our churches and our schools are dedicated to a far different approach to life’s problems.”

I’m surprised by the outcry against Father Fride for simply stating his opinion and opening up his church for the CPL classes, free to be attended or not attended. He is a priest, and therefore a human.  He will have opinions much like the rest of us and he has a platform in which he can express those opinions. Disagree or not, that is what a homily is in the first place: a human interpretation of the scripture read in Mass by the priest.  Parishioners go to church to hear this interpretation, so it is not out of left field to assume this man would have opinions on guns or other political issues as well.

Father Fride has since decided to follow the dictate of Bishop Boyea and has stopped offering the CPL classes at the church. As far as hierarchy goes, as a priest is under Bishop, Father Fride is simply complying with Boyea, though not agreeing with the Bishop.

I applaud Father Fride for speaking out on an issue he feels is of grave importance but that is held at arms length at times within the church he serves.  Self-defense is a famously crucial issue for many of his Michigan parishioners not to mention other Catholics around the country and globe.