Grandma to armed robber: 'I'll blow your head off' (VIDEO) 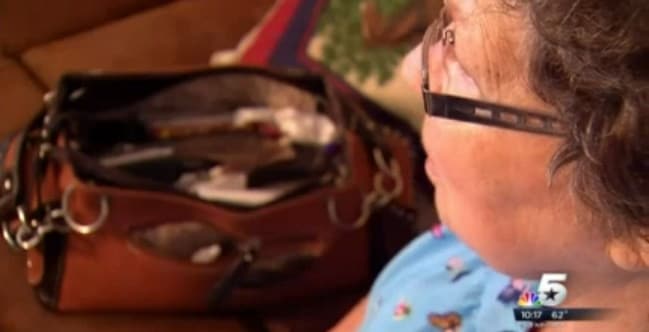 The suspect said he wanted what was in her purse, but what she pulled out likely wasn’t what he had in mind. (Photo: NBC)

After an attempted robbery Monday, one 74-year-old woman is thankful that she remembered to pack a pistol in her purse because the mere sight of it sent the suspect running.

Jewell Turner said she was sitting in her minivan near her doctor’s office when a young man walked up, tapped on the window and asked for directions. Turner gladly told the man how to get to where he was going, but moments later the tone changed.

The woman said she turned her head, and when she did, the young man put a knife to her throat and demanded money.

“He said, ‘I don’t want to hurt you, but I want your money. And I will hurt you if I have to,’” Turner later told a local NBC affiliate.

But all Turner had on her was pocket change – $1.62 to be exact. The small amount wouldn’t suffice, so the man told Turner to hand over what was in her purse, which was sitting in the front seat.

At that point, Turner recalled that she had a pocket knife, her late husband’s old knife. But then, as she reached into her purse, she remembered she had packed a very different accessory in her purse that day – a small pistol.

“I seen the gun laying there. And I figured that would work better than the knife,” Turner said.

The widow reached for the gun, turned around and pointed it at the man’s face.

The young man’s eyes became very big before he simply backed away and took off walking down the street.

The incident left Turner feeling very uneasy in more than one way.

But while the attempted robbery left her scared, she said she also realized there was a “dark side” in her that she never knew existed before.

“When I first pulled that gun on him I actually wanted to shoot him,” she said. “But I stopped and thought about it.”

Turner said she just hopes that the man is found before he hurts someone, or someone hurts him.