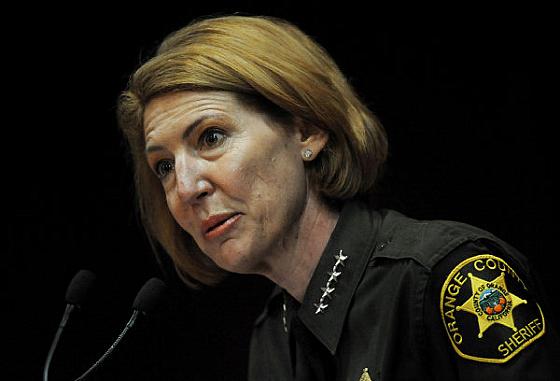 Sheriff Sandra Hutchens, under pressure from the NRA and the California Rifle and Pistol Association, will process hundreds of concealed carry applications without asking for more justification. (Photo: OC Register)

The sheriff, who has jurisdiction over some 3 million Californians, for 14 months accepted applications under the more permissive shall-issue guidelines of the Peruta decision handed down by a federal appeals court last February.

Then, when that same court took a vote to suspend the ruling and rehear it this summer in front of an 11-judge panel, Hutchens hit the rewind button and returned to her pre-Peruta policy of requiring that applicants prove why they need a permit by producing – for instance – documentation of protective orders, threats or past attacks to justify both new and pending applications.

Now, under pressure from the National Rifle Association and California Rifle and Pistol Association applied through the same legal firm that took point on Peruta, Hutchens relented on requiring the bulk of applicants currently in the pipeline to make it through without requiring them to jump through hoops set up retroactively.

“As Sheriff of Orange County, I intend to be responsive to the public’s needs while maintaining high standards of review,” explained Hutchens in a response sent back to firm of Long Beach based C.D. Michel, the CRPA and NRA’s West Coast counsel.

The Sheriff explained that of the 2,500 applications received during the Peruta honeymoon period, some 1,700 had already had a determination that accepted, among other things, a simple desire for self-defense as good cause to obtain a permit. Those applicants, some three fourths of the total, have been cleared to satisfy training requirements and will be allowed to proceed without revisiting that determination.

“Applicants whose good cause had been approved will not be required to provide additional good cause,” Hutchens said.

Those who had not reached that way-point in their process, however, may still have to produce further justification to satisfy the sheriff.

“Roughly 800 applicants were in the earlier stages of the application process and had not received a good cause determination. Depending on their original good cause, these applicants may be required to supplement their good cause statements,” Hutchens wrote.

Although delighted with the county’s decision to grandfather determinations made prior to the court’s decision to set Peruta aside, attorneys for the gun rights groups feel that Hutchens fell short of exercising the powers at her disposal.

“We are pleased that Sheriff Hutchens was gracious enough to respond to NRA’s and CRPA’s joint letter and let us know that she will make things right with these 1,700 CCW applicants as requested,” Sean Brady, an attorney with the Michel firm, told Guns.com Thursday. “At the same time, we are also dismayed that she has decided to continue with her restrictive ‘good cause’ policy even though there is no legal obligation that she do so.”

While Hutchens advised that her staff is in the process of contacting those who need to provide further information, Brady contends that the best thing both pending and new applicants as well as Second Amendment-minded citizens in the OC can do is to reach out and talk to the Sheriff.

“Residents of Orange County should let Sheriff Hutchens know that they reject her policy preference of restrictive CCW issuance,” Brady said. “There will likely be no change unless she feels the heat from the public.”

It is expected that oral arguments for the Peruta case will be set for this summer.