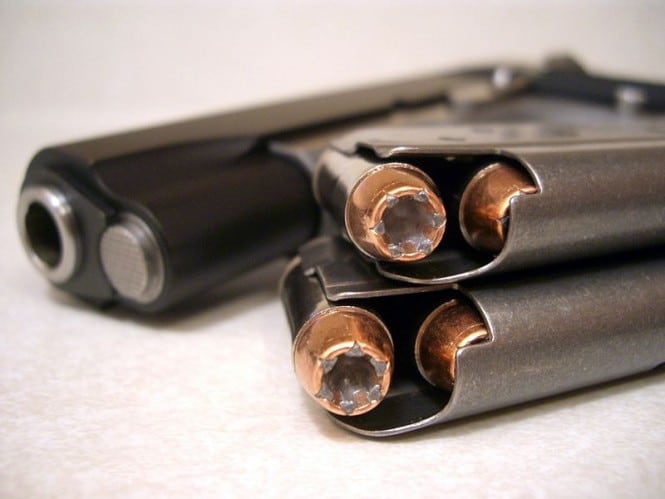 10mm JHP, a hotly disputed round in the context of military use.

Some of the ‘old school’ tactics, traditions and laws need to change because success on the field of battle depends on it.  You can’t fight and expect to win with one armed tied behind your back.

Who says you can’t shoot paratroopers in the air?  In a war zone, the only myth is people think they can’t.  Aim, maybe lead a little, and slowly pull the trigger.  If you have a shotgun, slap the trigger.

Who says you can’t shoot someone with a .50 cal?  You can and soldiers do.  A friend of mine did while in Iraq.  He shot a guy with a M2—the ma-duce.  And, of course, there’s always the Barrett sniper rifle.

And who says armies and navies can’t use JHP or other lethally expanding rounds?  I wrote about that a while back when I recommended the military move to JHP for combat.   At the time, I wasn’t thinking that I had to explain all the stupid laws that attempt to regulate war, but commenters were quick to remind me of this policy which is great.  What wasn’t so great were all the myths and half-truths I saw being shared about this “prohibition”.

When it’s all said, the rules of war are governed by the people fighting it and it’s not like the enemy—terrorists who take hostages and murder innocent civilians—follows “civil” rules, right?  They use planes as missiles!

Either shoot or get shot.  That’s the law of war and it rules all others.  Kill them before they kill you.

A revulsion to blood and violence

There is morality in warfare.  Civil people want to still be civil and just and there do exist conduct regulations and severe punishments for war crimes.  What hampers us from winning, in my opinion, are people who just don’t understand what’s needed to end wars.  Violence.

Violence is horrible and terrible, but the only way evil people can be stopped is by other people willing to be more vicious, and in some cases, more violent.  Violence wins wars.

I once had to put down a deer with a broken leg.  It was suffering, so I shot it.  That was the civil thing to do in my mind.  But there was a man who saw the deer and tried to comfort it before I got there.  He covered it up with a blanket.  I thought that was odd.

After I killed the lame animal, the man came back to the site.  He had a heated blanket and was planning on staying with the animal all night.  While that was a nice thought, I suppose, I don’t understand it.  I think a little differently than most.  I’m glad there are gentle people, but evil people don’t care about gentleness.  They’ll murder and commit even more horrific acts of violence without hesitation.  In short, justified violence is needed to protect innocence and civility.

It should be noted that having a mind to kill an animal or a person doesn’t mean those killers don’t have a gentle or compassionate side.  In fact, the reason why many military veterans suffer so much psychologically is because of the moral pains surrounding war.  And, it’s good to be repulsed by violence; it means we’re not psychopathic murderers without a conscience.

For as long as nations have been fighting, man has been trying to set the ground rules.

Guys like Saint Augustine (354-430 A.D.) and Saint Thomas Aquinas (1225-1274 A.D.) first developed the just war doctrine.  Later, Hugo Grotius (1583-1645 A.D.) refined the rules and morality involving jus ad bellum and jus in bello.  In short, those terms discuss the right cause to go to war and acceptable conduct during war.

Later, technology became the focus of military thinkers.  With the advent of the crossbow, royals and nobles tried desperately to have these “sniper weapons” (that could be used to silently assassinate military leadership) removed from European battlefields, under the penalty of death for even owning one.  Early firearms saw much the same treatment, the point being, as weapons became more technologically sophisticated and unconventional, the more they played on human fears and imaginations.

Francis Marion, the “Swamp Fox”, is known as the father of unconventional warfare.  During the Revolutionary War he and his irregular troops outwitted the British Redcoats who were stuck in the tradition of standing still and shooting.  Eventually, tactics evolved, but Marion was called out during this time to “come out and fight like a Christian”.  The British, who were losing against him, thought his tactics weren’t moral.

Of course, the ancient “just war doctrine” was established far before the invention of the modern bullet or horrific acts of global terrorism and nations have convened many times since then to establish rules of conduct in war zones.  These declarations have become labyrinthine and because not every nation was present or signed every treaty/regulation or agrees to every article within these treaties, it gets confusing quick as to what is actually illegal, what is custom and what is neither on the battlefield.  Additionally, as technology has advanced, provisions can appear increasingly contradictory. Which brings us back to jacketed hollow points.

The Hague Convention of 1899 (not the Geneva Conventions as is often repeated) prohibits the use of expanding ammunition in two places. Hague II Annex, Article 23, prohibits the employment of “arms, projectiles, or material of a nature to cause superfluous injury;” and Declaration III, prohibits “the use of bullets which expand or flatten easily in the human body, such as bullets with a hard envelope which does not entirely cover the core, or is pierced with incisions.”

The US interpretation of these rules, however, pertains only to the use of ammunition that increases suffering of the enemy, i.e. superfluous injury. This becomes important when you consider all the different uses hollow point ammunition is designed for today.  Boat tail hollowpoints, for example, increase accuracy and do not cause unnecessary suffering and, as such, it’s been argued that they are permissible in war.  I talked about this here in greater detail on my blog.

This same logic could be used to support the cause of JHPs on the battlefield.  In urban combat situations, where noncombatants are often in close proximity and even mixed in with combatants, JHP rounds are less likely to over-penetrate a bad guy and in the event of a miss less likely to penetrate through common building materials and injure or kill a noncombatant in another room.

As a side note, the United States is in fact not a Hague signatory, but that has become irrelevant since this prohibition has become custom internationally and military brass apply this “law” uniformly as more of a policy decision.  This has most likely led to the mistaken belief that JHPs in war are illegal in the US.

So why don’t military leaders change this stupid rule?  Frankly, I think it’s because nobody is interested in expending the political capital necessary to break a long tradition over a handgun round.  And also because they are well aware of the real law of war, which I mentioned at the top.

Regardless, the bottom line is, shooting someone with an expanding round or a round that causes death or pain should hardly be an inhibitive war restriction, especially when considering that the enemy doesn’t think that way.  The enemy doesn’t operate with any rules.  Archaic regulations, agreements, traditions and laws can really hamper success on the battlefield.  It’s time to change.  I believe we can still fight morally and justly, but we should never fight hindered in any way and expect to always succeed.