Concealed carry with toddlers in tow

I was in the middle of a major retailer’s bathroom. My son, two at the time, was in the midst of potty training and had requested a detour to the restroom. Inside the safety of the ladies room stall, I took a few minutes to adjust the holster on my hip while I waited on him.

“Mommy, mommy! Have! Pew Pew!” As I listened to him make shooting sounds I was suddenly very glad we were in an empty bathroom. Lucky for me the big, dead, stuffed moose head on the wall outside the bathroom took his attention as soon as we left the restroom. Like that, he had completely forgotten about the pew pew I was packing. I, however, did not.

As a concealed carry instructor I hear similar horror stories from parents who carry but also hear fears from those who don’t. They’re interested, obviously they are in my class, but they aren’t quite sure how to go about actually carrying with a kid. Though children might create a challenge, they certainly don’t have to limit your ability to carry concealed. 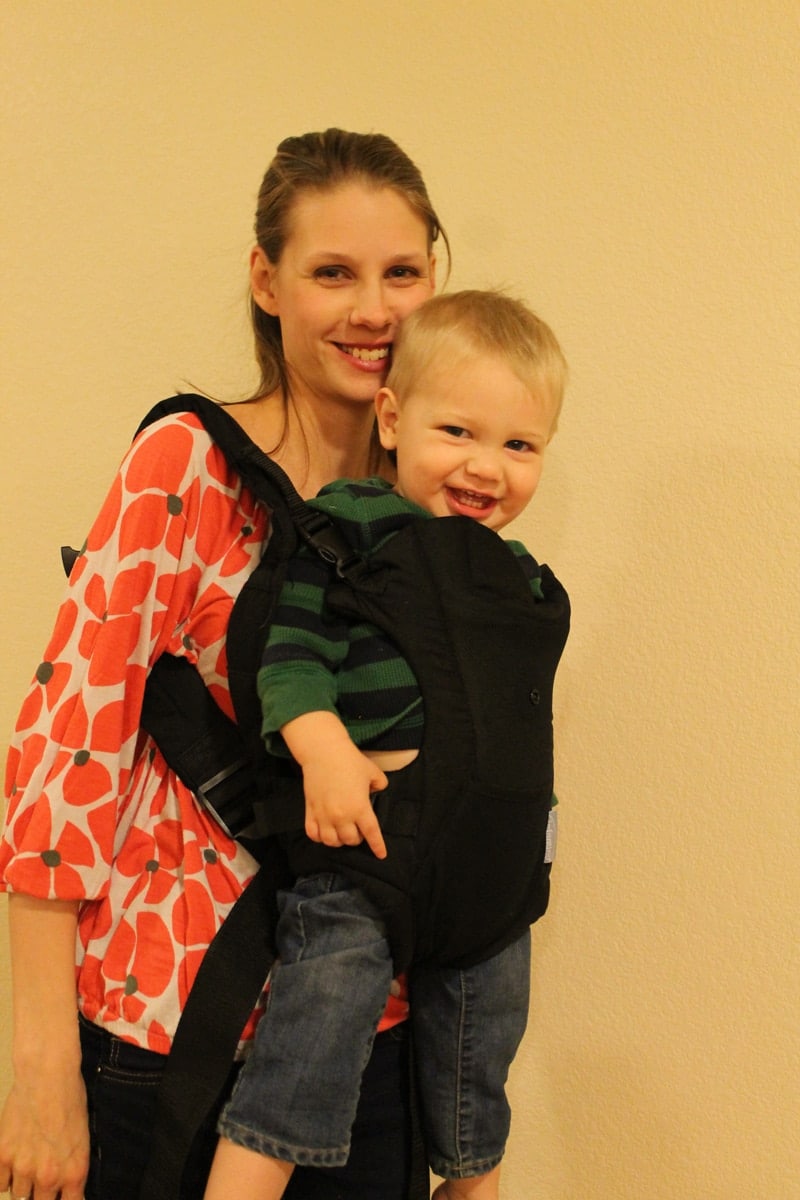 Carrying on your person

When toting little ones around, pairing the right holster and firearm to the right clothes become paramount to success. When you decide to carry that weapon on your person, you will need to think carefully about where you want it and how you’re going to conceal it.

Placement is the first factor to consider if you have small children. The hip tends to be a favorite among gun toters and parents alike. To reconcile the need to carry both, you have a couple of options.

The most obvious is to put baby on one side of the hip and the gun on the other. I don’t suggest trying to double stack them on the same side. Not only is this uncomfortable for baby and you, but it limits the ability to draw quickly and efficiently. By moving the child to the non-dominant side, you free your dominant hand up to be able to quickly draw from the hip. With this method, you will likely be shooting one handed while moving. If you haven’t practiced this before, start now. It’s not nearly as easy as you think it is.

Babywearing is another option for parents with smaller kids. Using a sling, pouch or traditional front/back carrier, babywearing frees up both hands. It’s no secret that the more hands on the weapon, the better control and stability you have. That means steadier shooting and better shot placement. Another positive aspect of babywearing is that the child is attached to you. If you’re kneeling behind a car or wall for cover, you’re not worried about balancing a squirming baby with one arm on a knee. You can focus on the fight and getting to safety.

Carrying inside a bag

For women who don’t want to deal with trying to fit clothes around a firearm, bag carry is a viable solution. Several companies now make dedicated concealed carry purses that feature built-in holsters. Though a gun in a bag is better than no gun at all, there are trade-offs to this style.

Unless you are carrying a revolver and are willing to shoot through your bag, draw time will be a factor. Drawing from inside a bag is significantly slower than drawing from the hip. I ran my own little experiment and found that I can draw from the hip at around 1.3 seconds. Drawing from my bag took me three times as long.

The second consideration is cleanliness. I know that sounds odd, but if your bag is anything like mine it’s full of cereal and random toy parts. This can prove problematic for handguns. A Lego down the barrel of your semi-auto is going to cause a malfunction. The last thing you want in a self-defense fight is a firearm that doesn’t fire.

For this reason, when I must bag carry I use a dedicated concealed carry purse. Now I do own a real concealed carry purse, the kind that is meant for a firearm. It’s functional but hideous. Instead of subjecting myself to fashion horror, I repurposed an old purse as my CCW purse. I use a regular holster clipped to a large inside pocket. The holster keeps my firearm in one place and I prefer the added trigger safety around the trigger guard.

In my makeshift CCW purse, I make it a firm point not to accept loose toy pieces or snacks. This keeps the bag clean which in turn keeps my firearm gunk free. The bag is by no means quick, but I am trading time for convenience. 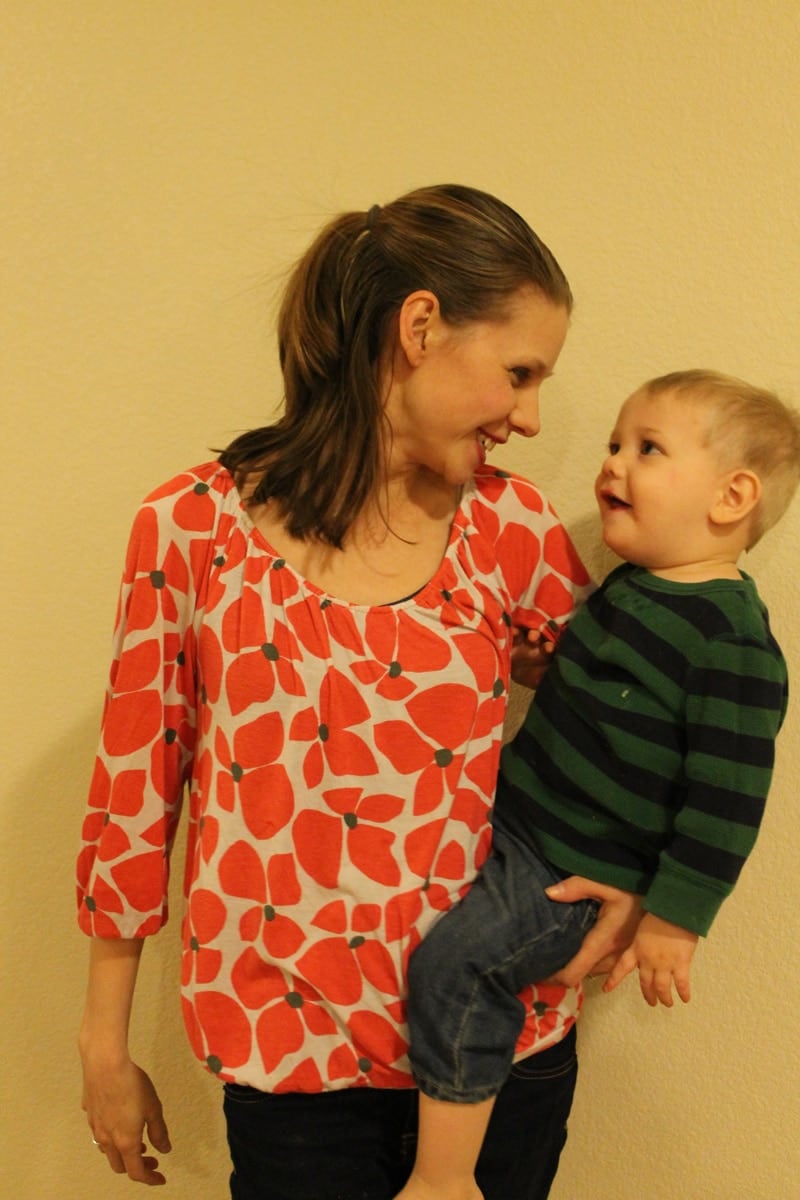 I have a several articles of clothes that worked perfectly for concealed carry. Then I had kids. The clothes that once concealed my firearm now cling to the butt of the gun, pulling and tugging. I found myself having to reevaluate my carry clothes. In most cases, form fitted clothes pull too much with a kid at the side. Flowy shirts, those that billow a bit at the top but cinch at the hip, work wonders. I find they seem to hug the right areas to give a smooth appearance despite the firearm underneath.

Length is also an area that needs special attention. As a parent, I do a lot of bending, lifting, and twisting. Despite all this movement, the shirt needs to cover the gun and keep it from printing. Longer shirts will keep the bottom of the gun from peeking out unexpectedly. To counteract any printing from bending, a simple purse or bag over that area usually does the trick.  Remember, patterns and florals also do an excellent job at breaking up gun silhouettes.

No matter what you break out of the closet, try it on with the holster and get the kids involved. Let them tug at you, pick them up, and kneel down to eye level. Get an idea of how you can move in your outfit and what the limitations are. If babywearing seems appealing, smooth out clothes as they sometimes get bunched as baby moves. Also ensure that all legs, feet, and toes are clear of your draw area.

Talking or not talking

If you are a parent, and I am assuming you are, you know kids come up with the most random words for everyday items. Gummy bears get turned into tummy bears and crackers become cookies. Despite my son’s obvious sound effects, he did get one thing right at the store. That was the use of our code word “have” for guns. It was one of those random words he just decided on. At first we corrected him, but then it dawned on us. This could work in our favor. Realizing that the under three crows is unreliable when it comes to instructions, a code word seemed the best way to skirt around the gun issue. He can talk about “haves” all he wants and there’s no panicked shushing on our part.

When our sons are old enough to understand the concept of a firearm and why we carry, we will bring him into the fold. At that time, they’ll stop being passive participants and evolve into active ones. They’ll need to know how to react in an active shooter situation and that neither of them has to talk to the police without our attorney present.

I look forward to the day that we’re not skulking about, using code words and plotting which clothes work best for tugging toddlers. Until then, I’ll keep using the techniques I’ve picked up along my concealed carry journey to keep them and me out of trouble.