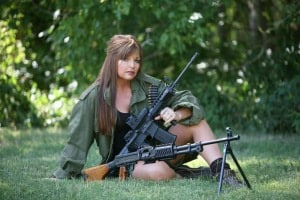 Jan Morgan says she doesn’t mess around with safety and if Muslims make her range unsafe, they have no business being there. (Photo: Jan Morgan Media)

An Arkansas gun range, whose owner declared her business “Muslim-free” last year and subsequently refused to allow a “brown-skinned” father and son to use the facility in January, are now in the sights of the U.S. Department of Justice, which confirmed it is “monitoring” the business, The Washington Post reported Friday.

Jan Morgan, owner of the Gun Cave Shooting Range, announced her decision in September to ban all Muslims, citing she has studied the Koran thoroughly and the book “contains 109 verses commanding hate, murder and terror against all human beings who refuse to submit or convert to Islam.”

Morgan also claimed her “life has been threatened repeatedly by Muslims” as a result of her outspoken opinions about Islam, and that since the group “clearly commands hate, murder, and violence against all non Muslims,” many of her patrons “are uncomfortable around Muslims with guns.”

A month after Morgan’s announcement, The Council on American-Islamic Relations (CAIR) sent a letter to several officials asking for an investigation to be launched into the Muslim-free gun range.

“Systematically banning Muslims from a place of business is a violation of federal laws prohibiting racial and religious discrimination and will inevitably result in a hostile environment for ordinary Muslims in Arkansas,” the letter stated.

Morgan responded to the move with a Facebook post, saying the letter contained “one lie after another,” and maintained her position on banning Muslims from her business.

In January, a South Asian father and his American-born son, who have lived in Hot Springs for a decade, went to the range for what the son said was some “father-son time,” but were promptly told to leave.

The young man, who wanted to remain anonymous due to safety concerns, said he and his father had frequented the gun range in the past, but had not visited as much in recent years because he had been away at college. They were unaware that it had changed ownership in those years.

The young man said Morgan immediately asked where the father and son were from, and they told her they lived in Hot Springs, the city where the range is located. According to his account, the conversation quickly turned its focus to the fact that Morgan’s facility is a “Muslim-free zone” and she told them that if they are Muslim, “then please leave.”

The father confirmed to Morgan that the were Hindu, not Muslim, but when he began to question Morgan about her “Muslim-free zone,” she told them to leave and threatened to call the cops if they didn’t.

The young man said they were only there because they “wanted to have some fun and shoot some guns,” and later told reporters, “I don’t know if she assumed we were Muslims,” pointing out the obvious – their brown skin.

Morgan once again took to Facebook to respond to the accusations, which she called “reckless,” and told Guns.com it was their “irrational behavior” that made her turn them away, not their brown skin. Morgan later indicated that they may have been under the influence of drugs or alcohol, and also accused the father and son of having an “agenda” which was “clearly designed to create the situation that occurred.”

Nonetheless, the incident led the American Civil Liberties Union of Arkansas to also ask for an investigation into Morgan’s policy. 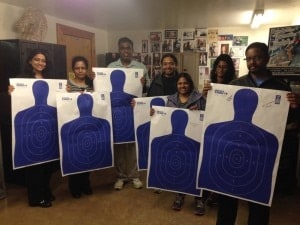 Jan Morgan said there are “a number of people with all colors of skin” who frequent her gun range. (Photo: Facebook)

“Members of the public, including those who have been unlawfully excluded, are understandably fearful of publicly challenging the illegality of exclusion of perceived Muslims from this facility,” the Arkansas chapter of the ACLU wrote in a letter to the Justice Department in January.

The group claims Morgan’s policy violates the Civil Rights Act of 1964, but Morgan disagrees, claiming that the Act doesn’t apply to her business because it is a private club with due-paying members, and not open to the general public.

Although the Justice Department is monitoring Morgan’s business, they did not indicate if a formal investigation is currently underway.