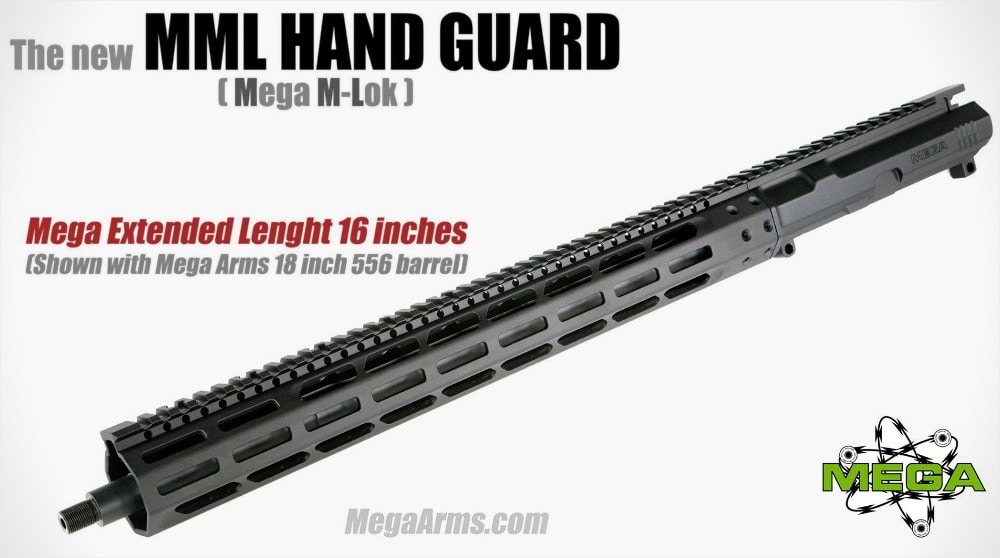 Update: we originally wrote that the Troy M-Lok Battlerails use the TRX barrel nut. The handguard mounts onto any standard AR-15 barrel nut, which makes it even more affordable.

Both Troy and Mega are re-profiling existing rails and uppers to use the newer M-Lok system. These parts have already been proven in their KeyMod configurations, which is good news for early adopters.

Troy is launching a set of octagonal Battlerails in 7-, 9-, 11,- 13- and 15-inch lengths. The parts are available with a black hard-anodized finish with flat dark earth to follow. Mega Arms is taking things a little further with series of complete MML (Mega M-Lok) uppers with standard 7-, 9- and 12-inch handguards along with its Extended Rifle and Mega Extended Rifle-length handguards that measure in at up to 16 inches for use with 18-inch and longer barrels.

Magpul is heavily invested in M-Lok, naturally, with a solid line of accessories including hand stops, forward pistol grips, weaponlight mounts and a full spread of Picatinny rail adapter sections in a wide range of lengths for legacy accessory compatibility. Troy Industries also offers their own in-house selection of M-Lok parts including adapter rails and quick-detach sling mounts.

Mega Arms doesn’t make M-Lok parts for their uppers and that’s fine, there are plenty of other good names in the M-Lok accessory business. What Mega has got to offer customers are 10.5-, 14.5-, 16- and 18-inch stainless steel 5.56 NATO barrels with a nitride finish that are with a sub-MOA accuracy guarantee. They also carry a nice selection of forged and billet lowers to match their uppers.

The M-Lok Battlerail uses any standard AR-15 barrel nut and is a drop-in upgrade for existing AR owners. The MML uppers come with everything needed for assembly and are designed to match Mega’s GTR-3H lower receivers, but the uppers are compatible with all MIL-SPEC lowers on the market.

Troy is offering drop-in rails for people who are building from scratch or just looking to upgrade their existing Battlerails. (Photo: Troy)

Troy’s handguards are especially affordable. The M-Lok Battlerails start at $173 and top out at $199 for the longest handguards. Mega’s uppers are more expensive, but include the matching assembled upper receiver, minus the bolt carrier group and charging handle. They start at $408 and stop at $500. These are suggested prices and are generally less in stores.

Between M-Lok and KeyMod it’s clear that the black rifle crowd is moving away from Picatinny rail systems, fast. Whether you’re looking to upgrade your existing Troy Battlerail or looking to build a new upper from scratch with the Mega MML, you’ll notice the benefits of M-Lok right away.

The M-Lok system, like KeyMod, is a negative space mount, where accessories mount into cutouts in the handguard. These cutouts eliminate the “cheese grater” feel of Picatinny rails and significantly cuts weight, too. These handguards generally weigh the same as, if not less than, conventional fixed polymer handguards, with all the advantages of a free-floating rail.

If you’ve been asking for Troy or Mega to get on to making M-Lok parts for your AR-15, the wait is over, and if you’ve been thinking about moving up from your existing fixed handguard or conventional quad rail, the time is now. For details visit Troy Industries and Mega Arms.